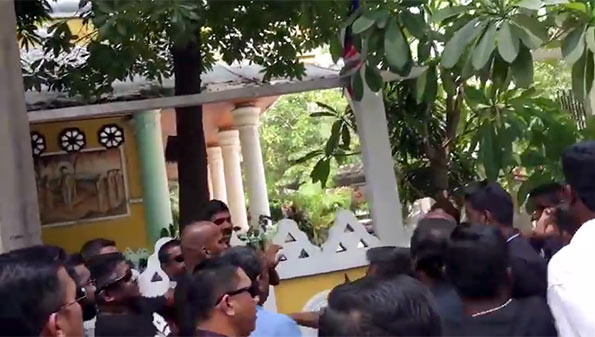 The chief monk of the Sri Lankan Buddhist temple in Sentul was assaulted by a small group among demonstrators conducting a protest against former Sri Lankan president Mahinda Rajapaksa who is visiting Malaysia.

The group of about 50 people had gathered in front of Putra World Trade Centre to protest against Rajapaksa’s attendance at an international conference of Asian political parties.

The protesters went to the Sentul temple when rumours of Rajapaksa’s supposed visit began to spread.

When the chief monk came out of the temple, some unknown individuals went to question him about Rajapaksa’s arrival. They then abused him with vulgarities and obscenities.

The assault began after one person touched the monk’s face, prompting another to punch his in the face. Two members of the crowd also kicked the monk, forcing Sri Saranan thero to retreat inside the temple.

Sentul police prevented the crowd from further attacking the monk, and MIETA chairman A. Elangovan entered the temple together with the police to apologise to the monk.

He said his group had gathered at the temple “because we want to give a stern warning to all Buddhist temples to not allow the mass murderer here.”

Elangovan agreed it was wrong to assault anyone at a protest and said he did not know who the attackers were. Several people had just joined the crowd to protest. “They are a bit emotional. But still, we can’t beat them up because this is a religious place.”

He said he had agreed with the chief monk that no one should be restricted from coming into a temple. “This is a religious place. We have no right to dictate who should come here and not.”

He said that if Rajapaksa came to the temple “to seek forgiveness from God, then it is fine. We have no say in who should come and not”.