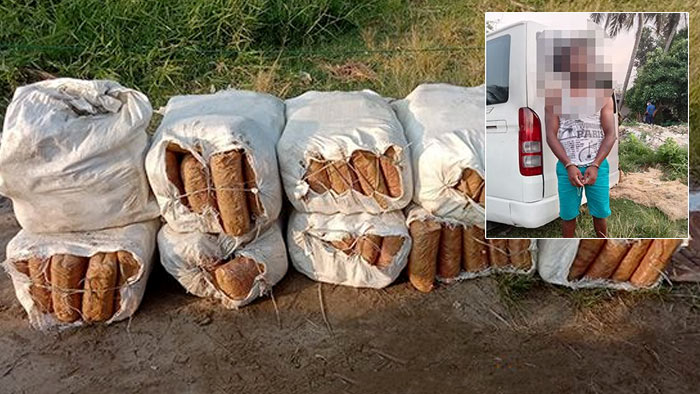 A special operation conducted by the Sri Lanka Navy in coordination with the Police Special Task Force (STF) has led to the apprehension of a suspect with a stock of approximately 400kg of Kerala cannabis in the Kelani estuary area of Thotupalawatta, Hendala this evening (February 23).

The joint operation conducted by the Navy and Police STF had made way to this apprehension in the Kelani estuary area of Thotupalawatta this evening.

During the search operation, the raiding party managed to recover approximately 400kg of Kerala cannabis concealed in a single-day fishing trawler and the stock was found packed in 185 parcels which were stuffed inside 10 sacks.

Accordingly, the consignment of narcotics, the fishing trawler, a suspect connected to this illegal racket and another dinghy were taken into custody, the navy said.

The suspect held in this operation was identified as a 31-year-old resident of Hendala.

Meanwhile, the gross street value of the seized stock of Kerala cannabis is estimated to be around Rs. 120 million.

The suspect, the fishing trawler, dinghy and the stock of Kerala cannabis have been handed over to the Police Narcotics Bureau (PNB) for onward legal action.

The Navy and Police STF are conducting further investigations in search of other suspects involved in the racket.