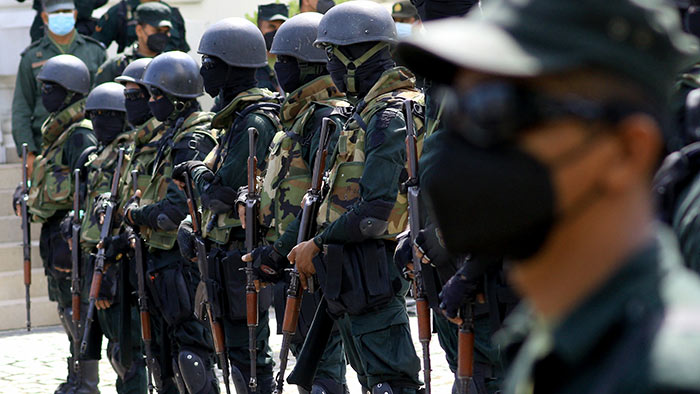 Protesters took away a T-56 firearm and two magazines containing 60 rounds of live ammunition from an army officer who was injured during unrest at the Polduwa Junction near Parliament last night (July 13), Sri Lanka Police said.

Meanwhile, a complaint has been lodged with the Borella Police in this regard.

The army officer in question and a policeman were wounded and hospitalised.

Tensions flared up last evening at Polduwa Junction near Parliament of Sri Lanka between protesters and security forces when the protesters tried to advance towards the Speaker’s official residence and Parliament.

Later, the police fired tear gas and used water cannons to disperse protests in front of the Speaker’s official residence near the Parliament of Sri Lanka as they attempted to breach the police barricades.

A large group of people were engaged in a protest near the Speaker’s residence.

According to hospital sources, 84 people injured in the clash have admitted to the Colombo National Hospital.

1 Response to T-56 firearm, two magazines taken away from injured army soldier amidst unrest near Parliament of Sri Lanka