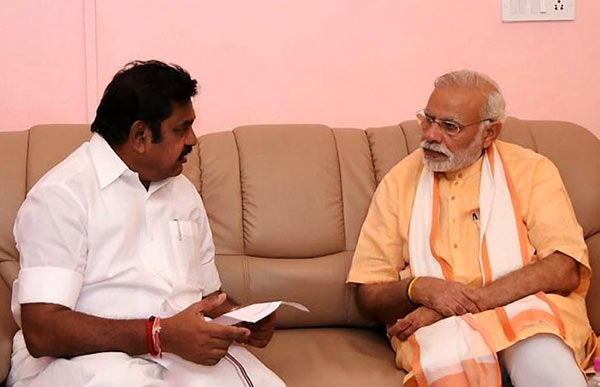 Thirteen Indian fishermen were today arrested by the Sri Lankan navy, prompting the Tamil Nadu government to dash off a letter to the Centre seeking its intervention.

Taking up the matter with Prime Minister Narendra Modi, Tamil Nadu Chief Minister E K Palaniswami, in a letter, said the state government was “extremely” concerned over such incidents and sought Centre’s intervention into the matter.

Such incidents of the arrest of “our fishermen by the Sri Lankan Navy (should) be taken up strongly at the highest diplomatic level to ensure the safety and security of our fishermen in the Palk Bay,” he said.

“The Government of Tamil Nadu is extremely concerned about the continuing apprehension and detention of our fishermen and their boats,” Palaniswami said.

The fishermen were arrested while fishing near Katchatheevu islet. At present, 48 fishermen and 122 fishing boats, including those detained today, were under Lankan custody, the Chief Minister said, adding, boats and fishing gear which were their only means of livelihood were still “impounded” in Lanka.

He said late Chief Minister Jayalalithaa had earlier repeatedly pointed out that Sri Lanka was following “a deliberate strategy of keeping the apprehended fishing boats of our fishermen in custody and thereby completely impairing their only source of livelihood.”

“Without their livelihood base, these fishermen are in a state of despondency. Though the Government of Sri Lanka committed to consider the release of these boats, no decision has been taken in this regard,” he said.

The chief minister urged the Centre to take up “this serious issue with the highest authorities of the Sri Lankan Government and ensure the immediate release of the precariously berthed boats which continue to suffer great damage with every passing day,” he added.

The Centre should secure immediate release of the 48 fishermen and 122 fishing boats, without any delay, he said. The International Maritime Boundary Line with Sri Lanka “is itself a matter that is sub-judice in the Supreme Court of India,” Palaniswami said.

He recalled that Jayalalithaa, as Opposition Leader in 2008, had filed a case in the apex court challenging the constitutional validity of the Indo-Lanka agreement on ceding Katchatheevu islet to the island republic.

The state government had later impleaded itself in the case.