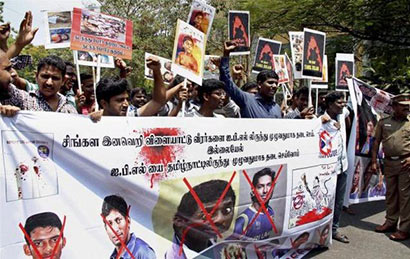 Designating the letter written by the Chief Minister of Tamil Nadu to the Prime Minister as communicating a “decision” to “ban” Sri Lankan players, officials and support staff from participating in any Indian Premier League (IPL) cricket game in Chennai would be imprecise. Rather, it is a putative ban; a statement of intent by the Government of Tamil Nadu to ban the Sri Lankan nationals on a future date should they set foot in the State.

The letter sought to justify the proposed ban on the grounds that the presence of the Lankans would have aggravated the already surcharged atmosphere in the State, and, presumably, have affected the law and order situation. This licences us to infer that at the appropriate time, the Police Commissioner of Chennai would have invoked, that ubiquitous and versatile tool, the prohibitory order under Section 144 of the Criminal Procedure Code — something that was also recently invoked by the Commissioner of Police, Chennai to delay the release of actor Kamal Hassan’s film Viswaroopam.

Is a State Government in India’s constitutional set up competent to do what Tamil Nadu’s did? It is difficult to see how that question could reasonably be answered affirmatively as the Tamil Nadu Government’s actions seem to fly in the face of the division of powers between the Union and the States contemplated in the Seventh Schedule of the Constitution.

The Constitutional and legislative regime in place gives the Ministry of Home Affairs (MHA), the exclusive power to regulate the admission of foreigners into India. If the State Government has concerns about the movement of foreigners in a certain part of India, it is at liberty to take up such concerns with the MHA. But the decision on which parts of India, foreigners are free to move in, could finally be that of the MHA alone. Once a decision to admit a foreigner without any geographical restrictions on his movements has been reached, by the MHA, it is not open to the State Government to refuse entry to a foreigner into the State.

A blanket ban on all Sri Lankans — solely on the ground of their nationality — adds another wrinkle to the problem. The issue then ceases to be merely that of regulation of admission of foreigners and passes over into the realm of foreign affairs. Denying admission in a State, to nationals of a country, solely on the grounds of their nationality, directly (not merely incidentally) affects the relations between India and the other country. Entry 10 of the Union List makes “all matters which bring the Union into relations with any foreign country,” a matter in which the Union Government alone is competent to act. The Constitution does not empower each State to work out its own foreign affairs policy. Giving the Union Government the last word on foreign affairs is absolutely imperative given the diversity of voices in India’s democracy and the disparate welter of interests they represent. This proposition has, of late, come under a lot of strain with several State Governments seeking to reorient India’s foreign policy in line with their parochial interests. This result is somewhat odd since the Constitution envisages a kind of federalism in which the Union Government is generally meant to be the dominant constituent, and the sole arbiter in matters of foreign affairs. This is an area in which the Union Government must reassert its Constitutional authority. This is, of course, not to suggest that the States should have no say in foreign affairs. To be sure, the States can bring to bear their weight on foreign affairs through proper legal and political channels. But all such channels stop well clear of exercising a de facto veto power over foreign policy formulated by the Union Government.

What about the law and order concerns which ostensibly motivated the Tamil Nadu Government? Such concerns, however justified, can never give the Tamil Nadu Government legitimate grounds to deny the Sri Lankan players entry into the State. The Union Government alone is competent to take into account law and order considerations when it arrives at the decision to permit admission to foreigners into the country.

If “law and order” concerns are recognised as a sound justification for the State Government to disregard the exercise of power by the Union Government, the Seventh Schedule, at least in its present shape and form, would become redundant. If a State Government is to run the governmental machinery in accordance with the Constitution, it must not be allowed to use “law and order” as a fig leaf behind which it can trump the powers of other constituents of the federation and upset the distribution of powers in the Constitution.