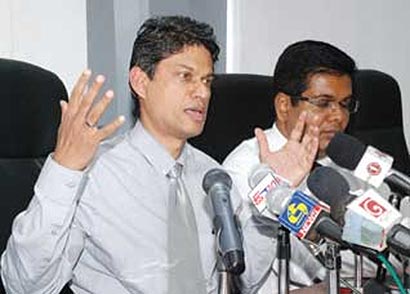 Professor Arjuna de Silva spelling out the ban on Himasha Eshan. Also in the picture is Panduka Keerthinanda, one of the members of the committee appointed to inquire into the country’s only positive dope case so far this year.  (Pic by Jude Denzil Pathiraja)

The three-member committee, which was appointed to inquire into the country’s only positive dope case so far this year, slapped a one year ban on teenage sprinter Himasha Eshan, who was found positive for banned substance methylhexamine following tests held last month.

The sprinter from Kalutara Vidyalaya produced a stunning 10.50 seconds performance to win the men’s 100 metres dash beating country’s seasoned campaigners at the 90th National Athletics Championship. Following the positive drug result, a three-member committee was appointed to investigate the case.

Professor Arjuna de Silva, the head of the Sports Medical Unit, announced the punishment determined by the committee yesterday.

Eshan will not be able to compete until November 2013. (RF)