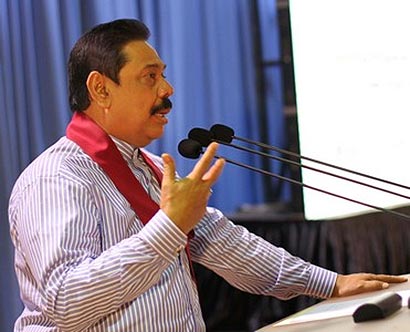 The religions provide a great contribution for reconciliation and it is the objective of the government to develop all places of worship and provide welfare to the people said Sri Lanka President Mahinda Rajapaksa on Monday (10).

The President was addressing Priests of Hindu Kovils and members of the Board of Trustees of such institutions at Temple Trees yesterday to mark the provision of assistance to Hindu Kovils isaldnwide.  He also emphasized that under the religious environment people become considerate and gain strength to face any form of challenges.

The government has allocated 75 million rupees for the development of 740 Hindu Kovils this year under the national programme for reconstruction of Hindu Kovils.. At yesterday’s function the President handed over assistance for 15 Hindu Kovils.

2 Responses to Religions provide a wide contribution for reconciliation – President