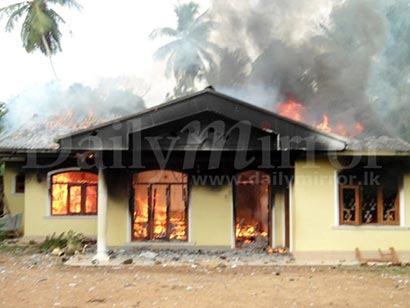 A tense situation prevails in Kahawatta as angry mobs have set  fire to two houses after they heard a suspect was arrested by the CID in connection with the double murder in Kahawaththe earlier this year.

The two houses belongs to a UPFA Pradeshiya Sabha member and his brother who is believed to have been taken into custody by the CID last night.

The victims of the murder, a mother and daughter, were identified as Kavindya Chathuranganie (19) and Nayana Nilmini (52). Several police teams under the direction of the senior DIG in charge of the Sabaragamuwa Province have been deployed into the area.

2 Responses to Tense situation in Kahawatta