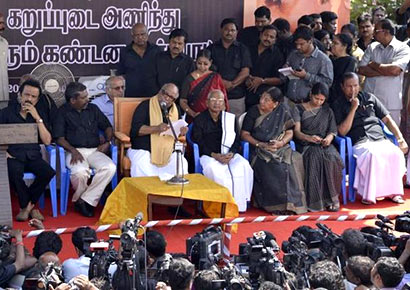 TESO will also hold a meeting in Delhi on March 7 in which various political parties and human rights organisations are expected to participate, TESO member and Dravidar Kazhagam president K Veeramani told reporters after a TESO meeting chaired by DMK chief M Karunanidhi.

“On March five, a picketing of the Deputy High Commission will be held. On the same day DMK and VCK MPs will stage a protest outside the Parliament,” he was quoted as saying by PTI.

The March 7th TESO meeting would discuss various matters pertaining to Sri Lankan Tamils, including their livelihood issues, he said.

He slammed the alleged killing of slain LTTE chief V Prabhakaran’s 12-year-old son Balachandran and said this was indicative of “war-crimes” by the army during the last phase of the Eelam War.