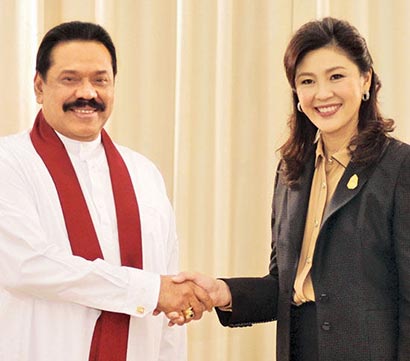 President Mahinda Rajapaksa’s official visit to Thailand has been very successful. During the discussions held with Thai Prime Minister Mrs. Yingluck Shinawatra she has said that Thailand will give its fullest support to develop agriculture, fisheries and educational sectors of Sri Lanka.

The Thai Premier while reminding about the long standing historical and Buddhist relationship between the two countries has said that both countries should work jointly on Buddhist and Cultural activities. The introduction of Siyam Upasampada to Sri Lanka by Thailand will complete 260 years by next year. Both leaders have focused attention on holding special commemoration programmes in both countries in this connection, and it has been agreed to appoint a special committee representing the foreign and cultural ministries of both countries for this purpose.

The president has thanked the Thailand government for the support it extended to Sri Lanka at the UN Human rights council sessions recently. The president has told the Thai Prime Minister that the government has given prominence to rebuild the infrastructure destroyed by the terrorists and requested the Thai Prime Minister to focus attention on investing in Sri Lanka. The president also thanked the Thai government for providing scholarships for Sri Lankan students in special sectors. The President has also said that in trade transactions between the two countries special attention should be focused on sectors important for both countries.

Both leaders have emphasized the importance of forming a joint committee to increase trade and investment between both countries. The President has expressed satisfaction about the progress made by Thailand in agriculture and fisheries sectors and requested the Thai Prime Minister to provide technical know-how to Sri Lanka on these sectors.

The President has assured that Sri Lanka will extend support for Thailand’s representation in the human rights committee for the period 2015 to 2017. Both leaders have also emphasized the importance of working together in exchanging views in international organizations in which both countries are represented.

The President has said that his visit will further strengthen the relations between the two countries and extended an invitation to the Thai Prime minister to visit Sri Lanka. Accepting this invitation the Thai Prime Minister commended about Sri Lanka’s scenic beauty and the hospitality of the people. She expressed satisfaction about the president vanquishing terrorism and establishing peace and stability in the nation.