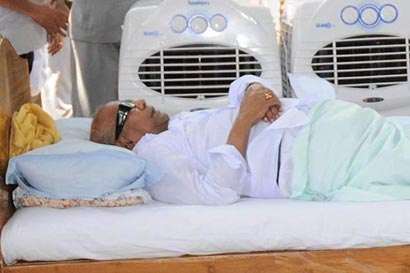 The Hindu newspaper in a strongly written op-ed piece said veteran politician Karunanidhi’s attempt to revive a forum called Tamil Eelam Supporters Organization, a mid 1980’s created platform to drum up support  for a separate Tamil nation in Sri Lanka is something incongruous in the current political context.

The op-ed piece entitled “Seriously Out of Touch”further said, “Having eliminated rivals to emerge the sole proponent of the cause, and having let the power of arms overshadow its political content, the Liberation Tigers of Tamil Eelam (LTTE) effectively destroyed the movement for separation through its ultimate defeat. Velupillai Prabhakaran has left behind only a legacy of ruin and devastation for his Tamil community.”

For parties in Tamil Nadu, the paper said, “Tamil Eelam” has been a useful tool for rabble-rousing while in the opposition, and an instrument of competitive identity politics that can goad the ruling party to take an even more strident stand. In office, the parties have administrative compulsions to crack down on “separatist” tendencies, book those indulging in “anti-national” rhetoric and frame or invoke draconian laws to keep fringe elements under check. For Mr. Karunanidhi it has been a record of flip flops ultimately dropping the core principle of the outfit the editorial further said. All it took was a mere visit from a Union Minister. The editorial reminded his arch rival Jayalalitha was no different and promised before a general election that the government she supports would send an army to Sri Lanka to carve out a Tamil Eelam.