The man is nuts; Dayasiri 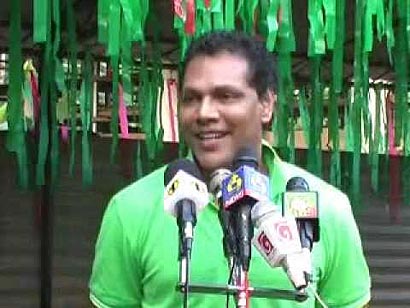 UNP MP Dayasiri Jayasekara responding to the call for a fresh mandate from the people by Minister Wimal Weerawansha said that the request was a very “foolish one and wouldn’t solve the mess we have got ourselves into”.

“This is as foolish as someone can get. Firstly we know how this government has repeatedly won elections; they have done everything illegal and taken the real wish of the people away. Secondly at this juncture how could a fresh poll solve  any of the issues with regard to the resolution?” he asked.

Jayasekara went onto point out that the country is currently at a very critical juncture with international opinion being turned against the government.

“This is a very critical juncture that this country is passing through. For the first time due to the continuous hoodwinking of the government, we as a proud nation have been made to take instructions from world powers. The fact that this government roused the people and hid behind the veil of an ‘international conspiracy’ did not help with the vote. The resolution was passed. What should be done now is to adhere to what has been called for instead of going around making foolish statements” he said.

The Kurunegala district MP further pointed out that the international community is not against the country but against the incumbent regime. “The continuous and blatant violations of human rights by the government, the continuous hoodwinking of the international community, the intimidations and threats that continue to this day openly even by Minister of the government has to stop first. These will at least help our countries credibility” he said.

6 Responses to The man is nuts; Dayasiri

Home » The man is nuts; Dayasiri