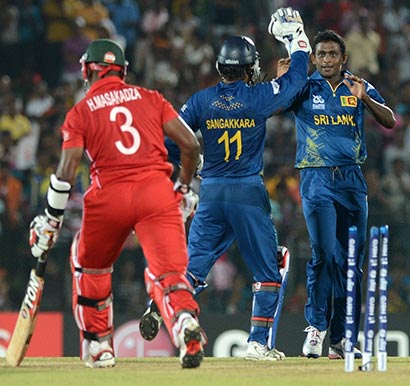 Ajantha Mendis marked his return to Sri Lanka’s national side by achieving the best figures in T20 internationals. He puzzled and prised out the Zimbabwe batsmen to contribute to a comprehensive victory in the tournament opener.

After Sri Lanka posted an imposing total, Ajantha tore through Zimbabwe. He took three wickets in his first spell to kill off any thoughts of a chase and returned to take three more to end Zimbabwe’s limp challenge. Mendis served up deliveries that held their line, those that turned in, the carrom ball and the googly from the back of the hand, leaving Zimbabwe with a sour taste in their mouths and befuddlement in their minds.

Another Mendis, Jeevan, too was major weapon in the home side’s armoury. He starred in a 94-run fourth-wicket stand with Kumar Sangakkara and took three wickets. Together, the two Mendises dominated an overawed and outplayed Zimbabwe.

Despite not bowling badly, a shoddy showing in the field and being completely at sea with the bat left Zimbabwe looking like the underdogs they were labelled as. They conceded heavily in the second half of the Sri Lankan innings when Sangakkara and Jeevan asserted their authority over an attack whose spinners held their own while the seamers fell apart.

Kyle Jarvis found swing and bowled an impressive two-over spell upfront, after he loosened up with a full-toss. He should have had an early wicket, too. Debutant Dilshan Munaweera hoicked a delivery to midwicket and Malcolm Waller could only grasp humid air. Jarvis’ opening partner, Brian Vitori, suffered the same fate. Tillakaratne Dilshan got a leading edge over Brendan Taylor’s head and even though the wicketkeeper moved quickly, he could not get to it in time to take the catch.

Sri Lanka’s opening pair flirted with danger twice more in their 54-run stand. Dilshan escaped a run-out when he stole a single to point and Munaweera was dropped a second time by Waller. Along with risk, came reward. Munaweera went on to glance Mpofu’s low full-toss to the boundary after Dilshan brought out his scoop to make things worse for the bowler.

Luck finally went Zimbabwe’s way in the seventh over when Munaweera was run out, after he dropped his bat in search of a run that was not there. As luck came, it went. Graeme Cremer had Mahela Jayawardene given out lbw of a back-foot no-ball. But, two balls later, Dilshan tried to cut Cremer and was caught behind.

Zimbabwe hauled Sri Lanka in temporarily. The hosts went 27 deliveries without scoring a boundary but Zimbabwe could not build on the pressure they created. Jeevan, who was moved up the order, broke the boundary drought when he drove down the ground off Mpofu, who was too slow to get down in his follow-through. The ball sliced between the long-on and long-off who both tried but failed to cut it off and Zimbabwe’s morale had been dented. Jeevan picked Cremer better than his predecessors and hit him for back-to-back fours to bring up the Sri Lankan 100. He also sunk his teeth into Elton Chigumbura who bowled a poor over, giving away the first six of the match.

Zimbabwe unravelled in the last quarter while Sangakkara kept a cool head and collected runs in twos and threes, along with a gorgeous drive over point, which went for four. Their lapses would cost them, as they faced a tall target and Ajantha ensured they were never in a position to reach it.

Hamilton Masakadza and Vusi Sibanda put on 37 for the first wicket, with Masakadza even having the gumption to take on Lasith Malinga. When Ajantha came on in the seventh over, he ended Zimbabwe’s hopes of running their own race of achieving a decent score or ending the match without being bowled out.

A magic box of tricks came from Ajantha’s hands: the ball that held its line to bowl Sibanda, the carrom ball that had Brendan Taylor stumped and the googly to bowl Masakadza. With their top three dismissed, Zimbabwe needed fighters but Craig Ervine and Waller succumbed to Jeevan’s googly.

After 10 overs, Zimbabwe were 59 for 5 and Ajantha could return to play some more. Zimbabwe reached three-figures but no more, as Mpofu spooned an easy catch to mid-off off Malinga to end the game. 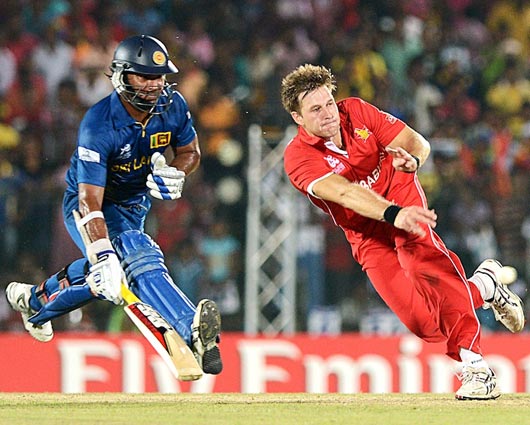 1 Response to The Mendises script big win for Sri Lanka