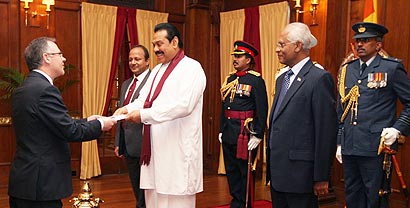 The newly appointed British High Commissioner (HC) to Sri Lanka, Mr. John James Rankin, presented his letter of credence from Her Majesty Queen Elizabeth II to Sri Lankan President Mahinda Rajapaksa on Monday, 14 February 2011 at the formal ceremony organized by the Ministry of External Affairs at the Presidential Secretariat.

He was appointed as the High Commissioner in September 2010 by the British Government and succeeded Dr Peter Hayes who was transferred to another Diplomatic Service appointment last year. Mr. Rankin is also appointed as the Non-Resident British HC to the Republic of Maldives. He is scheduled to present his credentials to the Maldives President Mohamed Nasheed next week.

The new HC expressed his desire to build on the close historic ties between the UK and Sri Lanka. He assured President Rajapaksa of the UK’s support for the fostering of sustainable peace. He also offered the UK’s condolences in respect of those who had suffered during the recent flash floods in Sri Lanka. Mr Rankin said he was pleased that the UK had been able to contribute sending emergency reliefs every time Sri Lanka needs emergency response.

The High Commissioner also welcomed the increased trade, investment and tourism in recent years which are in the interests of the two countries.

Mr. John Rankin joined the Foreign & Commonwealth Office (FCO) as an Assistant Legal Adviser in 1988 and has held different positions in different part of the world. He has served as legal adviser to the UK Mission to the UN and to the UK Mission to the Conference on Disarmament in Geneva. He has also served as Deputy Head of Mission at the British Embassy in Dublin, working on the Northern Ireland peace process, and was Her Majesty’s Consul General in Boston between 2003 and 2007.

Prior to his appointment as the British High Commissioner to Sri Lanka, he was FCO’s Director for United States of America, where he was responsible for a network of over 30 British Embassies in North, Central and South America and the Caribbean. He has a degree in Scottish Law from the University of Glasgow and a Masters Degree in International Law from McGill University, Montreal. Prior to joining the British Foreign Service, he qualified and practiced as a solicitor (lawyer) in Scotland and was a lecturer in public law at the University of Aberdeen.

The new British HC in Colombo is married to Lesley Marshall and has three children.