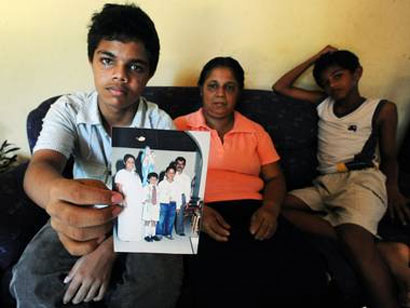 New freedoms promised by the end of 25-year civil war are still being denied journalists in Sri Lanka, where many who have taken an unbiased stance have paid with their lives

It is not simply dedication to his job that has led newspaper editor MV Kaanamyl-nathan to not leave his office for five-and-a-half years. In the spring of 2006, gunmen stormed into the building and sprayed automatic fire that killed two employees and left bullet holes in the walls and the table in the conference room that remain to this day.

Since then, two police officers have been assigned to permanent duty outside the building and Mr Kaanamylnathan and his wife have left their three-bedroom home in the city and moved into a small space next to the newsroom. “I don’t go out. The only exception is to go and see my doctor, a heart-specialist, once every three months,” Mr Kaanamylnathan said. “For that, I have to make to make special arrangements.

The plight of Mr Kaanamylnathan and his newspaper Uthayan, (Rising Sun in Tamil), where six members of staff have been killed in the past decade and many others attacked, threatened and harassed in incidents that continue today, is a frightening window into the world of journalism in Sri Lanka.

Campaigners say reporters and media employees here are among some of the most vulnerable in the world; at least 14 have been killed in recent years and many more forced into exile. Several others are missing and unaccounted for. Among the most high-profile of cases was that of Lasantha Wickramatunga, editor of the often-critical Sunday Leader, who was murdered in January 2009. Nobody has yet been charged with the killing.

The troubles at Uthayan, established in 1986 to appeal to working-class Tamils, did not end after police were deputed to guard the premises. A driver was killed several months later and a talented young reporter – recruited because senior correspondents declined to come to the office anymore – was shot dead the following year on his way to work. Most recently, the paper’s news editor, Gnanasundaram Kuganathan, was severely beaten by two men armed with iron bars as he left the office in July.

He has since left Sri Lanka and is staying in Europe. It is unclear when he will return. “It’s a miracle that I survived. I was beaten almost to death,” he said after the attack.

Mr Kaanamylnathan’s newspaper is owned by a Tamil member of parliament. While it insists its news coverage is unbiased, he does not hide the fact that the publication supports the cause of Tamil nationalism. Yet over the years, the newspaper has faced threats from the Sri Lankan military, Tamil militants and unidentified thugs allegedly linked to pro-government paramilitaries.

Between 1990 and 1995, the city of Jaffna, located at the very tip of Sri Lanka, was controlled by the Liberation Tigers of Tamil Eelam (LTTE), whose decades-long insurgency for a Tamil homeland was crushed in 2009.

“We have a relationship with all parties, even the military. We carry all the stories and all the statements,” said Mr Kaanamylnathan, whose wife pays a weekly visit to the couple’s house to make sure all is well. “The government is saying there is no problem, but the opposite is the case.”

Campaigners say President Mahinda Rajapaksa has failed to act to protect journalists and in many cases is responsible for a crackdown on dissent. Several journalists have disappeared without trace, among them Prageeth Eknaligoda, a political analyst and cartoonist from Jaffna, who was kidnapped in Colombo in January 2010, just two days before the presidential election. He worked for the LankaeNews website.

The journalist’s wife, Sandya, said there had been no news about her husband and no apparent progress with the case. The police claimed they were still investigating but did not appear to be very interested, she said. She has written to everyone from the President to the country’s human rights commission but, she said,no one had offered help.

“I have two children and both of them know that their father is missing. But we [are trying] our best to find him,” said Mrs Eknaligoda. “We know he is alive somewhere. I urge the government to find him. We are suffering because now we don’t have any income.”

More recently, the news editor of The Sunday Leader, Frederica Janz, was threatened after giving evidence in the court case of former army chief Sarath Fonseka, who was last week jailed for three years after being convicted of accusing the President’s brother of committing war crimes during the final stages of the war to defeat the LTTE. “We will not spare you,” said a handwritten note sent to her home in the capital.

Campaigners say that since his re-election Mr Rajapaksa appears to be tightening his grip on dissent. In recent weeks, the government has blocked access to websites, including that of the main opposition party, the UNP. A statement issued at the time by the Ministry of Mass Media and Information said a survey it carried out had revealed that certain websites were in violation of laws designed to protect against defamation and character assassination.

“We saw no ‘peace dividend’ after the end of the war, and what we’ve seen since is a crackdown on media that seems aimed at consolidating political power in the President’s office and his circle of advisers,” said Bob Dietz, Asia programme director at the Committee to Protect Journalists (CPJ). “The situation looks quite bleak.”

The moves by the government to try to control online media, a recently new development, were addressed in a report by the Centre for Policy Alternatives, an NGO based in Colombo. “The censorious attitudes towards media freedom and the freedom of expression more generally are increasingly evident in the online sphere,” it said.

“The insidious attempts to regulate online content; block websites; the attacks on journalists…and repeated statements from government officials threatening those who provide alternative and dissenting views do not bode well for the future of online freedom of expression in the country.”

The minister for mass media and information, Dr Keheliya Rambukwella, could not be reached for comment, but the government has always adamantly denied any involvement in attacks on journalists. Among the goals of its national media policy is to “safeguard the right of all citizens to express their views via any and all media and to receive, provide and gather information required for the proper functioning of society”.

After the attack on his office in 2006, Mr Kaanamylnathan took a decision not to repair either the bullet holes in the yellow walls nor the plastic-topped table, around which the senior journalists gather every afternoon do decide what stories will appear on the following day’s front page. He said: “We have kept it like this because if we did not, people would not believe us.”

A government-appointed body set-up to look into the civil war has reportedly concluded no state should be asked to “suspend military operations aimed at rescuing civilians forcibly held by a heavily armed terrorist group”.

The Island newspaper, known to be close to the government, said the Lessons Learnt and Reconciliation Commission (LLRC) had noted that while humanitarian law prohibits the targeting of civilians, it permits com-bat operations to rescue “hostages”. The report is not yet public.

A UN panel concluded there were “credible allegations” both government troops and the LTTE committed war crimes. It said tens of thousands of civilians may have died and called for an independent inquiry. The government dismissed the claims and established the LLRC.