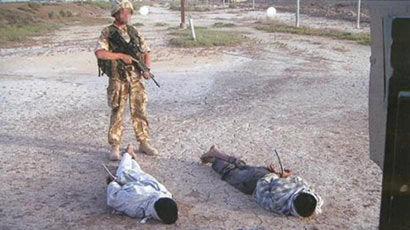 What can we say when 3 countries pretend they are the most virtuous nations of the world while as each day unfolds their crimes emerge one after the other? The latest in a never ending list of atrocities are images of US marines burning bodies of Iraqi’s, while a 250 dossier has been submitted to the International Court against UK war crimes in Iraq and India which has more military than civilians in Kashmir and unmarked graveyards think they can bring resolutions against other nations ignoring their crimes. Nations of the world must surely wake up and realize that in endorsing their actions by silence it is only encouraging them in their wicked ways and who knows who will be the next target. In a world where R2P – Global War on Terror are all synonymous with profit through plunder it is time other nations woke up to the realities that their nation may be next on the hit list.

In the case of the US – they have wriggled stipulations that have ensured none of their military gets pulled up for any crimes. The UK dossier is likely to be just an eyewash too because the ICJ has been accused of being the white man’s burden for African leaders ONLY. As for India, all we can say is they are living up to the legacy of how they were trained to function as sepoys through colonial rule. India is likely to simply watch their own natives be humiliated by the West simply to receive a pat on the back as the West’s new ‘ally’. The Indian diplomat’s humiliation is just one example of the likelihood awaiting many Indians as the West will test India’s reaction to how far it will go to show it is an ‘ally’ of the West and India is doing a great job of forsaking their own even distancing itself from the entire Asian continent to belong to the white man’s circle or rather circus. There are plenty of sepoys in Sri Lanka too even among the ruling and amongst public servants who falter to defend the nation’s sovereignty and its pride.

There are plenty who are willing to hand over the nation on a platter. Just as the US, UK and India are getting exposed for their criminality. They have become the laughing stock of the world and for officials who do not get a cent into their accounts from the plunderers should really start to rethink of the immoral role they are playing in the lies they are helping to fabricate. Is this what their parents or education taught them to do?

As for the rest of us in Sri Lanka all we need say is that we can see through every lie being weaved. As a nation the public is well aware of the lies being developed. We know the extent the local foreign missions have been apprised to build up the youth against the nation by sending them for youth camps and giving them modern electronic equipment and showing them how to bring about a Sri Lankan spring, we are also aware how even politicians are being manipulated – luckily none of us trust them and they stand for all that Buddha taught – nothing is ever permanent. Which is why the public is well focused on ensuring that whatever happens we will defend the nation against ALL those who are attempting to divide, devolve or separate the nation.

We are not ignorant not to realize the realpolitik at play which is why we do not buy these stories of the last 4 months – our war lasted 30 years and was an offshoot of the Tamil politicians calling youth to take up arms in 1976 with the Vaddukodai Resolution. If this period is not investigated in toto it will only place the Sri Lankan Government with the list of the above 3 groups as well.

We want the Government to start asking the correct questions. We will not accept half-hearted approaches now that the appeasement policy has failed Sri Lanka. For every accusation being made we want it to be cross examined and counter-questioned with the crimes taking place by the US, UK and India in the nations they have invaded and in the case of India its silence on the Kashmir issue. All the crimes of these nations are available to be used to ask the UN and its UNHRC head why none of their crimes ever gets UN panel of experts or the similar animosities that are being directed on a small nation as Sri Lanka that suffered 30 years of terrorism.

Niceties and diplomatic parlance are not in the vocabulary of these war mongers. The recipe of appeasement dished out by our foreign minister has repeatedly failed but is being repeatedly followed in a foolhardy strategy that has only resulted in 2 resolutions and the likelihood of a third spearheaded by the same parties.

Our brave armed forces saved the nation from terror and terrorists – they did so not to have it forsaken by a handful of sepoy public officials and Western stooges.

Whether the US, UK and India like it or not they have to accept they are not placed in any way to be pointing fingers especially India given that it hides its guilt of first training the LTTE and other militants on Indian soil.

Whether the religious entities and NGOs and even international NGOs like it or not they need to also accept that they too played a role in the continuance of the LTTE despite their obligations to civilians. All these entities would not like to have exposed their connivance with the LTTE over the years and the continuance which beckons us to ask what exactly their game is.

In any armed conflict as has been described – there is a winner and a loser. That is what wars are all about. Just because the losing party had a grand alliance of very powerful nations, powerful foreign organizations and officials we cannot help that they have all been defeated. It appears this is a case of crying over spoilt milk.

With each year the lies of these co-partners of the LTTE are coming out as it is a case of replacing a lie with another lie. With truth on our side we are ready to take on these lies for plenty of nations and leaders have been unfairly, immorally treated and there is karmic justice for these crimes.

We think it time that the Third World start waking up and realize that a United Africa, a United Asia and United Latin America can easily defend itself against the handful of white nations attempting to converge neo-colonial policies in a bid to once more loot and destroy our people.

The world must stop functioning as SEPOYS and LASCARINES – we must now wake up to ground realities.