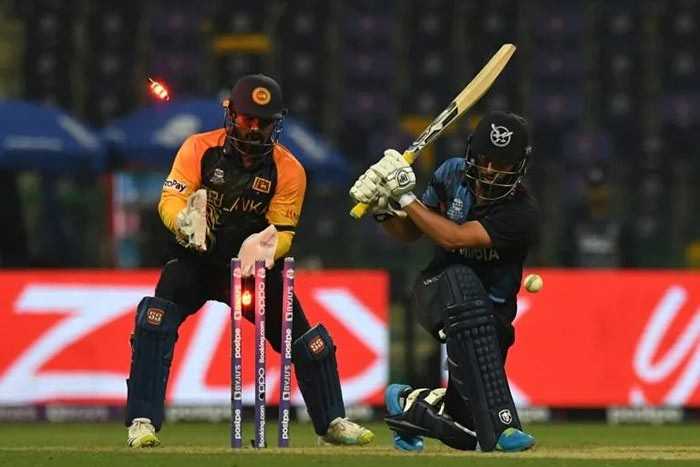 Spinners Maheesh Theekshana and Wanindu Hasaranga set up a comprehensive seven-wicket win for Sri Lanka against debutants Namibia in round one of the Twenty20 World Cup on Monday.

Theekshana returned figures of 3-25 and Hasaranga took two wickets to help dismiss Namibia for 96 in the second Group A encounter of the day in Abu Dhabi.

Namibia hurt Sri Lanka with three wickets in the chase but Avishka Fernando (30) and Bhanuka Rajapaksa (42) put on an unbeaten stand of 74 to steer the team home in 13.3 overs.

“We want to get through this qualifying stage. All well went for us,” skipper Dasun Shanaka said after the win.

Shanaka praised man of the match Theekshana and said, “He has been outstanding. He has been training with Ajantha Mendis back home and has a lot more to offer in the future.”

The 21-year-old Theekshana’s off spin and his carrom ball troubled the opposition batsmen as he sent back both the openers and later bowled Jan Frylinck for two.

Sri Lanka were in trouble at 26-3 while batting but the left-handed Rajapaksa, who survived a dropped catch on 18, smashed four fours and two sixes in his 27-ball blitz to ease the pressure.

Rajapaksa admitted their top-order inconsistency will be looked into before the remaining games.

“We have a bit of a concern when it comes to top order batsman. We have been struggling to get runs and not lose wickets at the same time,” Rajapaksa told reporters.

“It has not been in favour of us but going forward we are looking to correct the mistakes that we have done in past games.”

Bowlers remained key to victory with quick Lahiru Kumara also chipping in with two wickets to bowl out Namibia in 19.3 overs after Sri Lanka chose to field first.

Craig Williams with his 29, skipper Gerhard Erasmus, 20, and JJ Smit, unbeaten on 12, were the only three batsmen to manage double figures.

Sri Lanka, champions in the 2014 edition, top the group table ahead of Ireland, who thrashed Netherlands by seven wickets in the first match that witnessed Curtis Campher taking four wickets in four balls.