They are coming, be patient – Maithripala 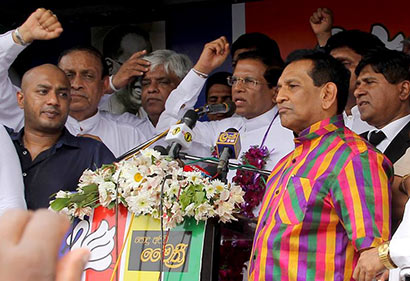 They were coming be patient, the Joint Opposition Fronts (JOF) Presidential candidate Maithripala Srisena said yesterday, in reference to his claim that more government MPs would back his candidature.Responding to questions at news conference held by the JOF at the Opposition Leaders office in Colombo, he said, “Be patient, more government MP’s and local councilors are coming. It’s a matter of time.”

Srisena, producing over Rs.1.3 million worth of unused petrol vouchers which he had received from the Health Ministry for this year as well as 2015, handed it over to a Health Ministry who was present.

“I have always returned unused fuel coupons and what I handed over now include this year’s unused quota as well,” he noted adding “This is money and I can sell them, but will not rob state funds.”

Leader of the UNP Ranil Wickremesinghe replying to queries on General Secretary Tissa Attanayake defection to the government yesterday said “I am sorry for Tissa. Our new General Secretary Kabir Hashim will speak about it in detail shortly. I have been entrusted with the legacy that our past leaders D. S. Ekanayake , Sri John Kotalawale, Dudley Senanayake, J .R. Jayewardene, Ranasinghe Premadasa and Gamini Dissanayake had left. We will emerge victorious regardless of a few nauseating crossovers.”

Chandrani Bandara MP, who was widely speculated to join Attanayake in defecting to the government said that she loved the UNP and would not let it down. “My family has been associated with this party for long years .It has always had the national and peoples interest at heart. I love the UNP so much and will not desert it for any consideration.”

4 Responses to They are coming, be patient – Maithripala

Home » They are coming, be patient – Maithripala