Through anti-tobacco & drugs policies, a healthy nation will be built – President 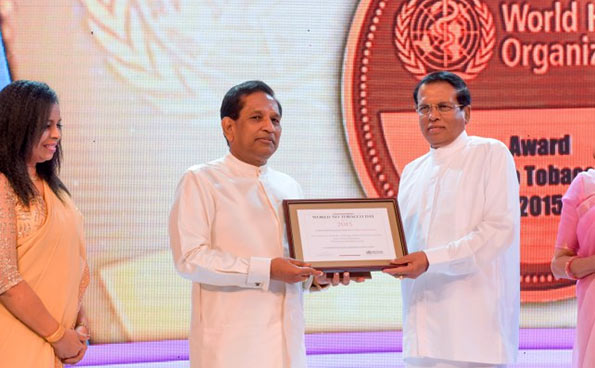 President Maithripala Sirisena says the responsibility will be fulfilled as a government for a healthy nation, through the government’s policy on alcohol and tobacco.

He added that the government will address the issue of the non- infectious diseases, faced by the world community and will do the best to build a healthy nation.

The President made these remarks speaking at the ceremony held yesterday at the Waters Edge Hotel in Battaramulla to felicitate Dr. Rajitha Senaratne; Minister of Health – Nutrition and Indigenous Medicine who has been honored with the World No Tobacco Day – 2015 Award, by the World Health Organization (WHO).

The President recalled the moment he received the same award on the 3rd of September, 2013 and expressed his congratulations to Minister Senaratne for winning this award in 2015.

“When I presented the paper to the Cabinet to establish laws to prevent tobacco products it was rejected, stating that Sri Lanka will not have tourists if that law would be enforced. Only Rajitha and Champika were there for me at that time”, the President recalled.

“The national movement I carried out against drugs and to bring the drug policy finally made me the President of this country”, he stated.

Ministers, Prof. Carlo Fonseka, Chairman of the National Authority on Tobacco and Alcohol, Dr. Palitha Abeykoon and the Director of the South-East Asia Region of WHO Doctor Punam Kethrashin participated in this occasion.

Home » Through anti-tobacco & drugs policies, a healthy nation will be built – President