Time to end attacks on fishermen: Jaya to Modi 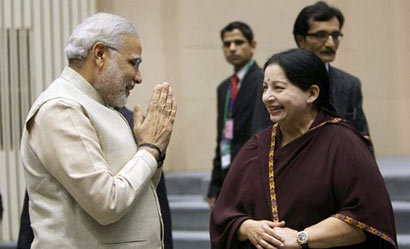 Her letter, which did not have the aggressive tone that marked most of her communications with Manmohan Singh when he was the Prime Minister, comes in the wake of 82 fishermen from the state being arrested by the Lankan navy on Saturday along with their 18 boats. She also thanked Modi for taking ‘prompt and effective action’ to get 33 Indian fishermen, who were arrested on June 1, released from Lankan jails.

The tone and tenor of Jayalalithaa’s letter to Modi indicate a genuine desire to pave the ground for better Centre-state relations, say observers.

Her meeting with Modi on June 3 in New Delhi had been cordial with both leaders keen to work together and find solutions rather than take a confrontationist path. In the past, the vexatious fishermen issue had taken a political colour with Jayalalithaa writing several strongly-worded letters to Manmohan Singh, accusing him of ignoring the plight of Tamil fishermen. Even while criticising the recent hike in diesel price, Jayalalalithaa had blamed it on the policies of the previous UPA regime.

In her letter to Modi, Jayalalithaa said the time has come to end the attacks on Indian fishermen and their “abduction” by the Sri Lankan navy. “The time has come now to lay down a time-bound action plan to achieve a permanent solution to the problem and also to put in place a strong and robust diplomatic response,” the chief minister said in her letter. “I am confident that with the governments of India and Tamil Nadu acting in concert, it would be possible to achieve a permanent solution to this vexatious issue,” she said. This is the second letter that Jayalalithaa has written to Modi on the issue and she had also taken up the matter when she met him in the capital on June 3.

Jayalalithaa said India should register the strongest disapproval of the “belligerent actions” of the Sri Lankan navy. “I urge you to have this issue taken up at the highest level on the Sri Lanka side to secure the immediate release of the 82 fishermen and their boats,” she said. She recalled a memorandum which was presented during her meeting with Modi and said protection of the traditional fishing rights of Indian fishermen in the Palk Bay and ensuring their safety and security remain a serious issue because of the aggressive posture taken by Sri Lanka. She listed all the incidents of arrests and harassment of fishermen by the Sri Lankan navy.

“The repetition of such aggressive acts by the Sri Lankan side immediately after the change in government at the Centre and the consequent reset in our relations with Sri Lanka does not seem to augur well for the peaceful pursuit of fishing in the Palk Bay by fishermen from Tamil Nadu,” she said. Observing that retrieval of Katchatheevu islet and talks between fishermen of the two sides could also help to resolve the issues, the chief minister said, “Even on this limited issue, the Sri Lankan side had adopted obdurate and obstructive attitude, which led to the failure of the last round of talks held in Colombo in May 2014.”

In a bid to resolve the deadlock in fishermen-level talks, Jayalalithaa, in her memorandum to Modi, had suggested deep-sea tuna long liners to prevent bottom trawlers from plundering marine wealth in the Gulf of Mannar.

Home » Time to end attacks on fishermen: Jaya to Modi