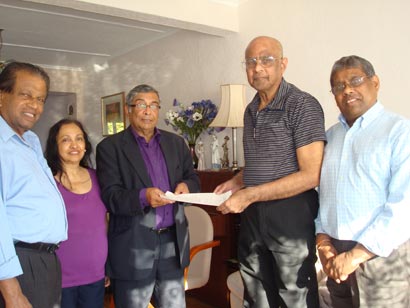 Mr Wijesinghe was the Honorary Treasurer of Sihala Urumaya (UK) virtually from its inception, an organisation which stood for unity and territorial integrity of Sri Lanka which firmly believed that terrorism should be, and could be defeated militarily.

Bodhi contributed immensely for the above cause, by lobbying various politicians and organisations, publicity work, as well as by huge monetary contributions towards the efforts in combating the terrorism which plagued Sri Lanka for over thirty years. He was very generous, and he went out of the way to accommodate Sihala Urumaya leaders whenever they visited the UK. Mr Wijesinghe was an active executive member of the local Labour Party-UK and contested local council elections several years ago.

At this special meeting Sihala Urumaya (UK) Executive Committee also allocated a total sum of £2800 towards resettlement and rehabilitation work for displaced victims of terrorism in North and East of Sri Lanka.