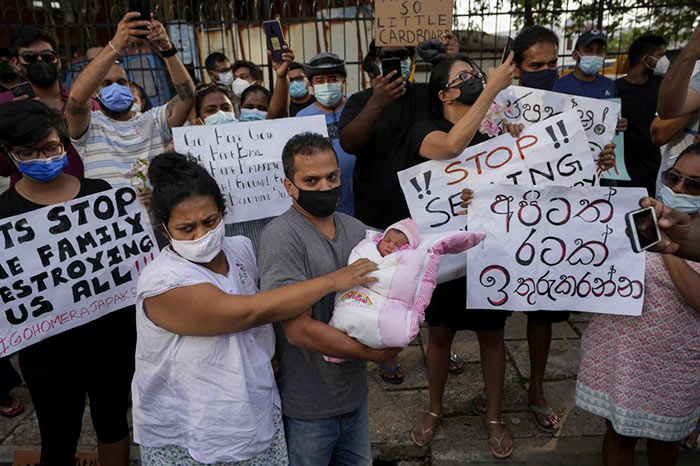 Sri Lanka’s president was set to appoint a new cabinet Monday as security forces braced for possible violence with more protests expected against worsening shortages of food, fuel and medicines.

Twenty-six ministers in the cabinet — all members except President Gotabaya Rajapaksa and his elder brother Prime Minister Mahinda Rajapaksa — submitted letters of resignation at a late-night meeting on Sunday.

The move clears the way for the president to appoint a new cabinet on Monday — possibly including some of those who quit — as the ruling political clan seeks to shore up its position in the face of the economic crisis.

The country is in the grip of an unprecedented shortage of food, fuel and other essentials — along with record inflation and crippling power cuts with no sign of an end to the economic woes.

The situation is acknowledged by the government as the worst economic crisis since independence from Britain in 1948, and it has announced it will seek a bailout from the IMF.

Troops and police were placed on a high state of alert as a 36-hour curfew ended at dawn Monday despite intelligence reports warning of more unrest, a top security official told AFP.

“Indications are that we can expect more demonstrations,” he said, reiterating that the military has been empowered to detain suspects under a state of emergency declared on Friday.

President Gotabaya Rajapaksa imposed the emergency a day after a crowd attempted to storm his home in the capital Colombo.

Throughout Sunday evening, hundreds of people staged noisy but peaceful demonstrations in towns across the island of 22 million denouncing Rajapaksa’s handling of the crisis.

Sunday’s full-day curfew prevented larger protests that had been organised through social media platforms such as Facebook, Twitter and WhatsApp, all of which were blocked by the government.

The platforms were unlocked and the partial internet censorship ended after 15 hours as the Human Rights Commission of Sri Lanka ruled that the ban was illegal.

Activists said they will hold larger demonstrations in several key towns on Monday to force President Rajapaksa and his family to step down.

A junior coalition partner has announced it will quit the administration this week, a move that would weaken Rajapaksa’s majority in the legislature.

Many economists say Sri Lanka’s crisis has been exacerbated by government mismanagement, years of accumulated borrowing and ill-advised tax cuts.