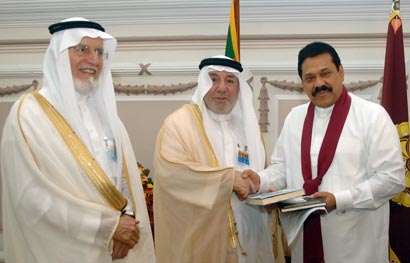 Two prominent Muslim scholars from Saudi Arabia who are also the heads of two world leading Muslim organizations called on President Mahinda Rajapaksa at Temple Trees on 06 May.

President of the World Muslim Congress Prof. Dr. Omar Naseef and Prof. Dr. Hamid Bin Ahmad Al-Rifaie who heads the International Islamic Forum for Dialogues and the Vice-president of the Muslim World Congress met the President while they toured Sri Lanka for a short period.