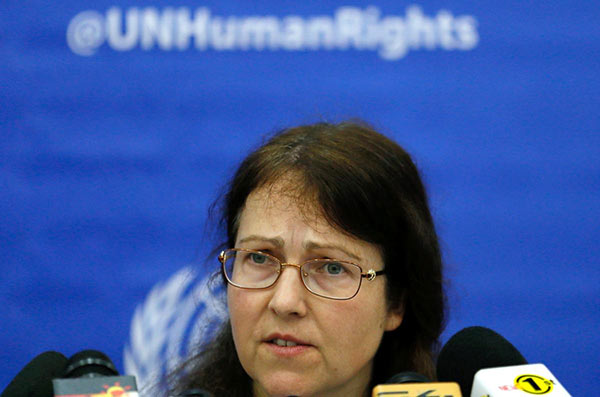 Sri Lanka has used the 1979 Prevention of Terrorism Act (PTA) to pursue a tough line to prevent aiding and abetting terrorism in the island nation’s long conflict with Tamil Tiger rebels.

That legislation gives wide powers to police to arrest a suspect without informing the immediate family, restricts access to lawyers and allows detention of up to 18-months without charging.

The war ended in 2009, but the government has not repealed PTA, though it had promised to end arbitrary detentions.

Many ethnic minority Tamils who have been arrested under the PTA have complained of years of detention without being charged.

The U.N. is now asking Sri Lanka to repeal the draconian law and introduce an internationally acceptable law.

The government says it has begun moves to replace the PTA and is in the process of introducing new legislation.

“There are no effective safeguards against arbitrariness in this context and there is an urgent need to strengthen mechanisms for independent monitoring and oversight,” Leigh Toomey, a member of the UN working group on arbitrary detention told reporters in Colombo after concluding a 11-day mission.

She said they had identified significant challenges to the right of personal liberty in Sri Lanka, resulting in arbitrary detention across the country.

The Working Group also said their attention had been drawn to a loss of liberty among the socially vulnerable, such as children, women, elderly people, people with psycho-social problems and the poor.

Sri Lanka is under criticism from the rights groups over its slow progress on the commitments it made to the UN human Rights council following a U.N. resolution that called for post-war reconciliation and an investigation of all alleged war crimes.

Sri Lanka ended a 26-year-civil war crushing the separatist Liberation Tigers of Tamil Eelan in 2009. The United Nations and rights groups have accused the military of killing thousands of civilians, mostly Tamils, during the final weeks of the conflict.

The Tamil Tigers were also accused of widespread abuses during the war, such as using child soldiers and targeting civilians with suicide bombers.

In November European lawmakers said they were disappointed about Sri Lanka’s slow roll-out of human rights reforms that it had promised in exchange for trade concessions.

A U.N. rights watchdog in 2016 called on Sri Lanka to investigate documented allegations of torture and rape of detainees by security forces and to rein in broad police powers.

The U.N. Committee against Torture described continuing reports of abductions, deaths in custody, poor conditions of detention and the use of forced confessions in court.