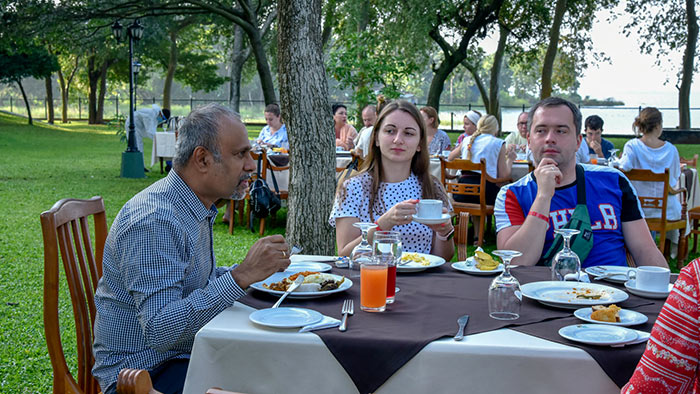 The group was greeted by officers of the Central Cultural Fund, and were taken on a guided tour of the place.

The Army and the police had been deployed to provide security to the Ukrainians. After completing the Polonnaruwa tour, they left for Matale.

The Army, police and CCF officials were in protective gear in view of the pandemic.

Our attempts to contact Sri Lanka Tourism officials to learn whether Weeratunga had informed them of the tour in advance failed.

Hundreds of Ukrainian tourists have arrived in Sri Lanka since late December as part of a pilot project to reopen the country to tourists. Around 10 of them have so far tested positive for COVID-19. They have also visited a number of sites without informing the Tourism officials.

In late December, 2020, the Chairperson of Sri Lanka Tourism, Kimarli Fernando, wrote to the Tourism Minister, stating that it was through the media that she heard that the Ukrainians had visited Yala and had gone whale-watching, in Mirissa.

She said: “The agreement at the Task Force Meeting was for the tour organisers to provide the SLTDA detailed itineraries in advance, including details of the drivers and guides who would be involved in these excursions to be relayed to the regional health authorities for screening and quarantine purposes. The Director General of Sri Lanka Tourism Development Authority has tried to obtain the necessary information in this regard from the travel agents to no avail.” (RK)