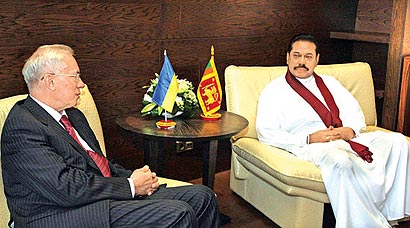 He said Ukraine already has a similar exchange program with Brazil and it hopes to involve Sri Lanka too in such a program in the future.

President Rajapaksa said Information Technology had advanced considerably in Sri Lanka and that space knowledge too would greatly benefit it. The duo also discussed several bilateral agreements signed between the two countries the previous day. It was also decided to set up a joint Commission between the two countries to implement these agreements to ensure beneficial results.

Discussions were also centred on measures to foster enhanced cooperation between the two countries through interaction between people’s representatives, businessmen, members of the tourist trade and student scholarships.