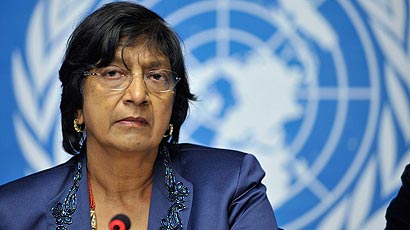 GENEVA – The United Nations’ human rights chief called on Monday for an international inquiry into war crimes committed by both sides during Sri Lanka’s civil war, saying the government had failed to do its own credible investigation.

In a much anticipated report ahead of a U.N. Human Rights Council debate next month that could order action on the issue, Navi Pillay recommended an “independent, international inquiry mechanism, which would contribute to establishing the truth where domestic inquiry mechanisms have failed.”

The United States plans to propose a resolution against Sri Lanka at the meeting and Pillay’s report, based on her visit to the country last August, adds to pressure on the government.

President Mahinda Rajapaksa’s administration, in 18 pages of comments as long as Pillay’s report, rejected the recommendations as “arbitrary, intrusive and of a political nature”.

Many thousands of civilians were killed, injured or remain missing after the 25-year conflict between government forces and separatist Liberation Tigers of Tamil Eelam (LTTE) that ended in May 2009, Pillay said in her report to the Geneva forum.

She said there had been little progress in establishing accountability for “emblematic” wartime crimes, including the January 2006 killing of five students on a beach and the execution of 17 aid workers later that August.

“None of these cases has … resulted in the perpetrators being brought to justice,” she said.

Conclusions of a national Lessons Learnt and Reconciliation Commission have been rejected or ignored, such as its finding that the army was responsible for shelling civilian areas, Pillay said.

“The High Commissioner (Pillay) is also concerned that legal proceedings have not begun against any LTTE suspect for alleged war crimes or other human rights abuses,” the report said.

Pillay also voiced concern at rising attacks by Buddhist monks on minority Muslims and Christians and at ongoing harassment of activists, lawyers and journalists.