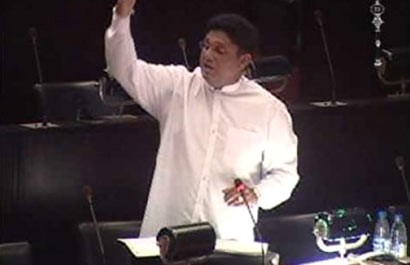 Samurdhi and Housing Minister, Sajith Premadasa, yesterday in Parliament requested the Minister of Defense to investigate two unofficial armories allegedly being operated at Beliatta and Weeraketiya.

Participating in the debate moved at the time of adjournment of the House, the minister said the two armories had grenades and T-56 automatic rifles. They were being operated under the command of the Blue Brigade led by a UPFA MP from the Hambantota District. “Some of those weapons were used to terrorize the party supporters of Maithripala Sirisena’s campaign for the presidency.

“I call upon the Minister of Defense to raid these armories and arrest their owners,” he urged.

Minister Premadasa said the opposition had moved a motion to debate post-election violence. “This motion is nothing but a joke. The opposition, who were in the government then, has forgotten the violence, intimidation and terror unleashed on our members in the run-up to polls. They are talking of post-election violence overlooking what they did before the elections,” the minister said.