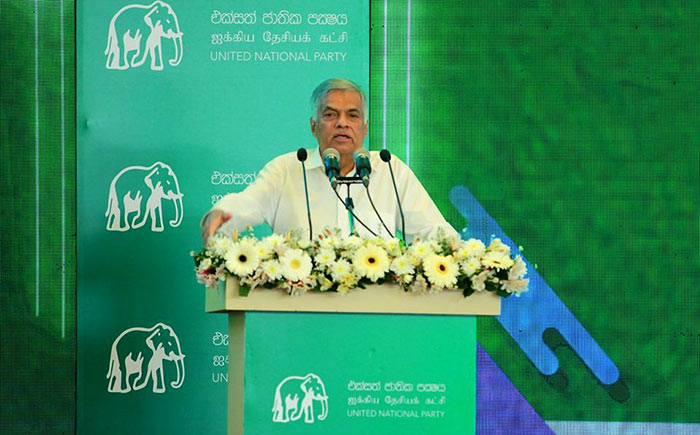 Referring to the rally organized by the Joint Opposition yesterday, Prime Minister Ranil Wickremesinghe today questioned as to how individuals who cannot even stage a proper protest, govern the entire country.

He was speaking during the 72nd anniversary celebrations of the United National Party (UNP) which was held today (06) at the party headquarters – Sirikotha.

The PM said that he had received several phone calls the day before yesterday inquiring as to whether holding the party convention was necessary today due to concerns over the opposition’s “Jana Balaya Colombata” protest campaign and requesting to postpone the event to safeguard the government.

The media is saying that the ‘flower bud’ is strong and scaring people that students and others could be harmed, Wickremesinghe said. “I said that we will do our thing and let them do their thing.”

“I would like to say that only the United National Party and our 72nd anniversary are remaining.”

The Prime Minister inquired from the gathering as to what was the historical thing that happened yesterday.

He stated that for the first time 138 housing schemes were commenced by UNP deputy leader and Housing Minister Sajith Premadasa and that none of the media had reported on that.

“This party cannot be destroyed through media,” the UNP leader declared.

He stated that when they took over the government many people thought they will not be able to carry on for long. But we faced the banks from which loans were taken, we faced a drought, we faced floods and everything else, he said.

Wickremesinghe conceded that the government had to take difficult steps and that he will not deny that. “We had to increase VAT. The prices of goods increased. But we did everything for the country,” he stressed.

2 Responses to UNP cannot be destroyed through media – Ranil