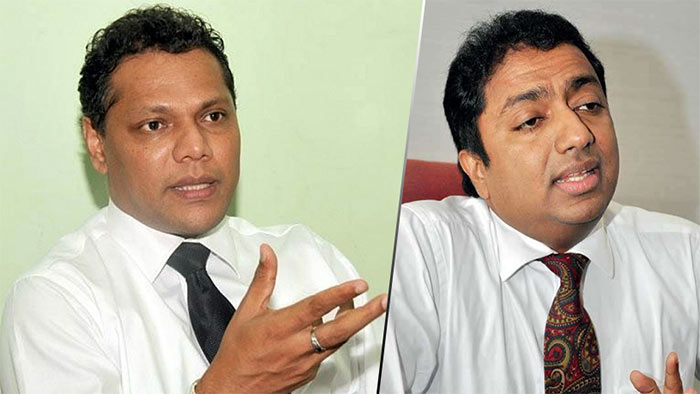 The SLFP, which is contesting the Parliamentary Polls on the Podujana Peramuna ticket, shared common ground with the UNP, on the feasibility of holding the elections as scheduled on June 20 when the two parties along with 32 others met the Elections Commission in Colombo, last week.

General Secretaries of the UNP and SLFP, Akila Viraj Kariyawasam and Dayasiri Jayasekara respectively, who not long ago worked together in the post-2015 government, but parted ways when their leaders fell out, had urged the Elections Commission to take a final decision, on whether the Parliamentary Polls which had been postponed from April 25 to June 20, could in fact take place on time, with the number of Coronavirus infected persons increasing by the day.

Informed sources said that the Elections Commission headed by Mahinda Deshapriya and comprising Ratnajeevan Hoole and Nalin Abeysekera, remained non committal, but Deshapriya gave an indication of what to expect when he said that they were doing their best to keep to the set date, but certainly not over the dead bodies of voters. The Commission is also being cautious by delaying the issue of preferential numbers to the candidates.

General Secretary of the UNP Akila Viraj Kariyawasam had pointed out that it was the third time they had met in recent weeks, but no finality had been reached with regard to the date of the election.

He recalled the government saying that the Coronavirus disease would be brought under control, by the time the polls campaign began; but there was no sign of that happening and the candidates were unable to move about freely.

Whatever decision the Elections Commission took, Kariyawasam had stressed, should give priority to the safety of the voters.

General Secretary of the SLFP Dayasiri Jayasekera had said that most people were not in a frame of mind to go and vote enthusiastically and fearlessly.

Deshapriya had noted that holding the Parliamentary Polls amidst the pandemic, could result in costs doubling to Rs. 14 billion. He had explained that the originally allocated Rs.7 billion would not be sufficient since special measures would have to be implemented, to protect both voters and election workers from the virus.

The UNP, SLFP and many other political parties that attended the meeting, had urged the Election Commission to decide on the best course of action and end the state of suspense.