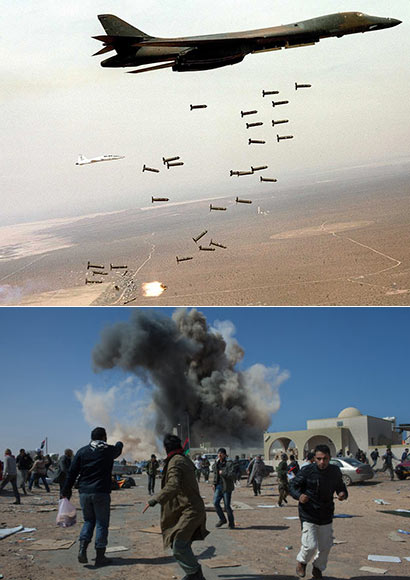 America cries ‘bring down dictators’ little forgetting that they vote for Presidents who do not think twice about ordering use of chemicals upon entire villages and wiping out the natives of nations they invade on fictitious allegations that they have become masters at cooking up. While US falsely accuses countries of possessing ‘weapons of mass destruction’ America conveniently hides its use of depleted uranium and cluster bombs but has the audacity to send officials to sovereign nations and denigrate these nations purely based on allegations most of which they know are concocted with their connivance. With all these criminalities staring at America, the country creates portfolios to cook up war crime charges against other nations and these officials are now asking us to ‘seek truth’ and quoting a whole list of other terminology that is part of the bandwagon of lies and like the US tweet falls well in line with the modus operandi of how US and other globalists function.

So our most recent visitor has been US State Dept investigator for ‘war crimes of other nations except US’ and he will be or would have already drafted parts to be inserted into the 3rd Resolution against Sri Lanka in March. Who is making the allegations that the US will take as witness? Father Rayappu Joseph, Bishop of Mannar who declared open the ‘Embassy of the Tamil Eelam’, the Eelam House in London and allowed LTTE to use the Madhu Church and even fired from the Church to provoke the army to fire leaving the army with a Hobson’s choice and the Bishop never so much as issued a single statement demanding LTTE to leave or even complained to Church superiors overseas. It was a question of whether they all knew about the LTTE usage and did not mind.

The discussion is on America’s use of weapons of mass destruction which are divided into 3 broad types – nuclear weapons, chemical weapons and biological weapons.

There is nothing to be surprised that US remains the ONLY country to have used nuclear weapons in combat – secretly developed under the ‘Manhattan Project’ in the 1940s.

US did not think twice of the implications of using nuclear on civilian populations – in fact it was the objective when it used nuclear weapons TWICE on Japan (Hiroshima and Nagasaki). These two bombings killed 140,000 Japanese and injured over 130,000 people continue to still suffer the consequences. First was on 6th August 1945 and the next was on 9th August 1945 – knowing what happened on 6th August, 3 days later the US repeated the horrendous crime.

The occasions of US using chemical and other biological weapons are too many to list and their usage have covered the following list of nations US has militarily being involved in since World War 2.

Some of the crimes committed by the US in these countries are given below.

The South Koreans have filed over 60 large scale killings by US Military during the Korean War. US had adopted a policy of shooting refugees approaching US lines. The mass killings include:

The U.S. government funded an illegal, covert bombing campaign that killed tens of thousands of innocent civilians and left the small nation of Laos burdened with a deadly legacy that lives on today. Between 1964-73 US released 2.1 million tons ordnance (UXO) over Laos repeatedly. It was a direct violation of the Geneva Conventions on war to protect civilians and the 1954 Geneva Accords and 1962 Geneva Agreements that prohibited the presence of foreign military personnel or advisors in neutral Laos. US bombing missions were every eight minutes, twenty-four hours a day, for nine years. The United States dropped more bombs on Laos than it had dropped on all countries during World War II. After the war ended, up to 78 million unexploded cluster bombs and other ordnance remained, posing a constant threat to civilian life. In June 2007, a speech made by U.S. State Department official Richard Kidd – The U.S. government acknowledged that no other country in the world had suffered the long-term harm from cluster bombs that was inflicted on the people of Laos. UXO continues to kill or injure close to three hundred people each year and poses a major impediment to economic development. Laos remains one of the poorest countries in the world.

US Maj. Gen. Chuck Wald admitted that US jets were firing ‘depleted uranium’ bullets in Yugoslavia (BBC 5/7/99) A10 carries 30mm seven-barrel cannon capable of firing 4200 rounds of DU tipped bullets per minute. In a single minute 234kg of DU can be released. DU is highly toxic.US has in excess of 1.1billion pounds of DU waste.

U.S. admitted to using cluster bombs in Yugoslavia but it has claimed the right to do so after a supposed misfire during which cluster bombs hit a crowded market in Nis and killed 15 civilians. “The bombs struck next to the hospital complex and near the market, bringing death and destruction, peppering the streets Serbia’s third-largest city with shrapnel and littering the courtyards with yellow bomb casings” (“NATO Attack Misfires – 15 Civilians Die.” Chronicle News Service, San Francisco Chronicle 5/8/99).

“The hospitals pathology clinic was damaged, and its walls were pockmarked with small craters that appeared to have been caused by shrapnel. About 10 yellow canisters with parachutes attached were visible on the street near the hospital” (Reuters. “Serbs Say 15 are Killed at Hospital and Market,” New York Times 5/8/99).

Paul Watson in an article for the Los Angeles Times 4/28/99 exposes the indiscriminate nature of cluster bombs and their widespread use in Kosovo. During five weeks of air strikes witnesses here say, NATO warplanes have dropped cluster bombs that scatter smaller munitions over wide areas.

When cluster bombs are used: Each cluster bomb is composed of 200 to 700 bomblets. When each bomblet explodes it fragments into about 300 pieces of jagged steel – sending out virtual blizzards of deadly shrapnel. People are decapitated, arms, legs, hands and feet are severed from their bodies – anyone and anything alive in the immediate vicinity is shredded into a bloody mess.

The United States stockpiles over one billion submunitions in weapons currently in service. Nearly three-quarters of this stockpile of submunitions are contained in MLRS rockets and 155mm artillery projectiles.

The use of cluster bombs has been admitted by both the U.S. and British military. (Human Rights Watch “U.S. Misleading on Cluster Munitions” 25 April 2003)

The U.S. even boasted that they used “for the first time in combat history” a new version of this banned weapon, the CBU-105. (“US drops new high tech cluster bomb in Iraq” –http://www.abc.net.au/news/newsitems/s823003.htm)

Stephen Rapp – may like to comment on 2003 Iraq, cluster weapons used in Hilla hospital and ask why US embassy did not send a tweet on these crimes Robert Fisk of the Independent wrote: “Terrifying film of women and children later emerged after Reuters and the Associated Press were permitted by the Iraqi authorities to take their

cameras into the town. Their pictures – the first by Western news agencies from the Iraqi side of the battlefront – showed babies cut in half and children with amputation wounds, apparently caused by American shellfire and cluster bombs. Much of the videotape was too terrible to show on television and the agencies’ Baghdad editors felt able to send only a few minutes of a 21-minute tape that included a father holding out pieces of his baby and screaming “cowards, cowards” into the camera. Two lorryloads of bodies, including women in flowered dresses, could be seen outside the Hilla hospital.”(The Independent April 03, 2003)

TO REALIZE WHAT DAMAGE SUCCESSIVE US GOVERNMENTS HAVE DONE TO HUMANITY AND THE WORLD THIS SINGLE GALLERY WOULD SHOWCASE TO THE WORLD THE HORRIFIC CRIMES COMMITTED BY THE UNITED STATES OF AMERICA – http://www.whale.to/b/nguyen.html

It is not just the lives of foreign civilians that US has ruined. The Department of Veterans Affairs claim that the “Gulf-era veterans” now on medical disability since 1991 number 518,739, with only 7,035 reported wounded in Iraq in that same 14-year period. The US military are on drugs, anti-depressants or suffering some sort of malignancy and the number of personnel committing suicide is also shocking.

Yet, wars/conflicts/invasions and occupations are taking place and governments are committing troops because these leaders are puppets of a group of conglomerates who are motivated to make money through wars and plunder. Thus, the bombing targets are generally non-whites, those in the Third World or Muslim nations except of course for Yugoslavia where bombing white European Christians qualified the term ‘equal-opportunity bomber’! It also showed that even Orthodox Christians are now targets and reveals the invisible minds behind the history of bombings.

There is a significant reason why we say US has no legal or moral right to point fingers given America’s horrific track record of WMD criminalities. Whether the US likes it or not they have to accept this hometruth. As for the UN its entire purpose of existence is on the line and it is today nothing but a sham and officials nothing but stooges told to create reports to legally authorize what is illegal.

The lies of the US led West and the hypocrisy of the UN is best revealed in the Nuremberg Tribunal – “war is essentially an evil thing. Its consequences are not confined to the belligerent states alone, but affect the whole world. To initiate a war of aggression therefore is not only an international crime, it is the supreme international crime, differing only from other war crimes in that it contains within itself the accumulated evil of the whole”.

If the UN was created to prevent war, aggression, make illegal crossing borders (except in self-defense) what is it doing endorsing attacks when none of these countries provoked or even attacked the US/West?

USA and its globalists are daily crossing borders illegally and attacking countries covertly, overtly and now on supposed ‘official’ capacities which are all against the UN Charter and to top it off the US has brought in legislature so that none of US crimes or its soldiers will ever get tried in any international court for the crimes committed or being committed.

How many are keeping silent of US war crimes and watching the farce of Rapps being sent to cook up charges when US is blind to its own crimes?

Surely the Americans themselves and the citizens of the West must now wake up to realize that they too have been made fools of over the years.