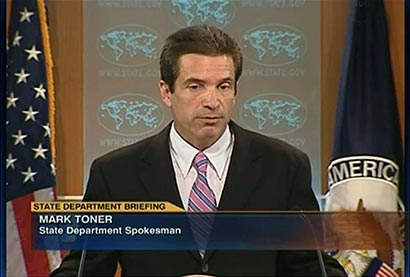 The United States has said that it wanted Sri Lanka to take “concrete steps” on reconciliation as the Colombo government vowed mass protests against US-backed calls for a UN censure on human rights.

Sri Lanka has faced strong international criticism over the finale of its civil war in 2009 but has avoided censure at the UN Human Rights Council amid hopes overseas that Colombo would come up with a domestic plan.

The United States said this month that it would support a motion at the Geneva-based body’s upcoming meeting.
Sri Lanka appointed the Lessons Learnt and Reconciliation Commission on the war. But State Department spokesman Mark Toner said Sri Lanka had not followed up on the panel’s “many strong recommendations.”

“To date, frankly, we’ve not seen a detailed action plan from the government of Sri Lanka on how it’s going to implement these recommendations,” Toner told reporters.

“We still encourage the government of Sri Lanka to move forward, to take concrete steps on this implementation plan,” he said. “At the same time, we’re working with our partners in Geneva on a resolution within the UNHRC that calls for actions on important steps toward reconciliation.”

Human rights groups say up to 40,000 civilians perished in the final months of the government’s military campaign to crush the Tamil Tigers, who waged a bloody decades-long campaign for a separate homeland for the Tamil minority.
Sri Lanka maintains that no civilians were killed by its troops.

In Colombo, government spokesman Susil Premajayantha said yesterday that rallies would be organized across Sri Lanka to show that people “are against the Western forces” that support the proposal in Geneva.

Sri Lanka’s relations with the West have sharply deteriorated since the end of the civil war, with the Tamil diaspora leading campaigns to pressure Colombo, AFP reports.

4 Responses to US URGES ‘CONCRETE’ RECONCILIATION STEPS BY SRI LANKA