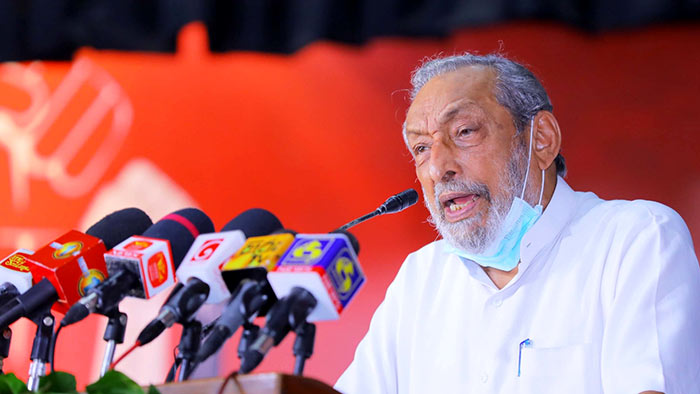 Addressing the media at Dr. N. M. Perera Centre, Cotta Road, Borella, the General Secretary of the Democratic Left Front (DLF) said the rebel group, within the ruling coalition, was sure of its assessment.

Ratnapura District lawmaker Nanayakkara said that they couldn’t have remained silent as the incumbent dispensation quite controversially opted for what he called, neo-liberal policies at the expense of President Gotabaya Rajapaksa’s manifesto, ‘Vistas of Prosperity and Splendour.’

Having opposed the controversial Yugadanavi deal with the US-based energy firm, New Fortress Energy, in September 2021, the dissident group had launched an alternative economic recovery plan, on 02 March, this year, lawmaker Nanayakkara said.

MP Nanayakkara explained how they had tried to prevent the government from departing from its original plans. Their failure to reverse the government decision on Yugadanavi had prompted them to oppose it in public.

The government had given a boost to their campaign by removing NFF leader Wimal Weerawans, and Pivithuru Hela Urumaya (PHU) leader Udaya Gammanpila from the Cabinet on 03 March following the unveiling of alternative proposals, the veteran leftist said.

Nanayakkara endorsed allegations his colleagues, Weerawansa and Gammanpila, levelled against Finance Minister Basil Rajapaksa. Prime Minister Mahinda Rajapaksa has declared that the Finance Minister wouldn’t be removed under any circumstances.

Minister Nanayakkara said their future course of action would be influenced by the government’s reaction to their campaign.

Nanayakkara said they had opposed to the 20th Amendment, which enabled dual citizens to enter Parliament. He recalled how they had discussed the matter with President Gotabaya Rajapaksa.

President Rajapaksa had assured the dissent group that the purpose of the constitutional amendment was to counter the yahapalana attempt to prevent him from contesting the 2019 presidential election.

President Rajapaksa stressed that the change had been made as a matter of principle. But contrary to the assurance given by the President, Basil Rajapaksa had brought into Parliament in July last year and made the Finance Minister, MP Nayakkara said.