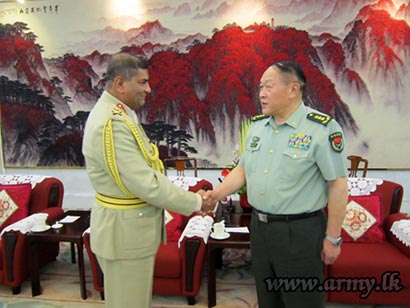 People’s Liberation Army (PLA) of People’s Republic of China (PRC) is prepared to provide Sri Lanka with any assistance whatsoever in case of any emergency, catastrophe or otherwise, so said General Lisng Guanglie, Minister of National Defence, PRC during a meeting held at the PLA General Headquarters on Thursday (7) with Sri Lanka’s Army Chief currently in Beijing.

This is the first time in the Sri Lankan military history an incumbent Commander of the Army had the rare distinction of having a separate meeting with a high profile portfolio of a PRC Minister of National Defence in the PRC.

Lieutenant General Jagath Jayasuriya, Commander of the Army, who arrived in Beijing Wednesday (6) afternoon at the invitation of the PLA of People’s Republic of China set about continuing his formal itinerary Thursday (7) morning after paying a courtesy call on General Ma Xiaotian, Deputy Chief of General Staff, PLA and General Lisng Guanglie, Minister of National Defence, PRC at the PLA General Headquarters.

General Guanglie, PRC’s Minister of National Defence after extending a warm welcome to the Sri Lankan Army Chief and his delegation at his office during the cordial meeting with Lieutenant General Jayasuriya, elaborated the roles and tasks, assigned to him in the PLA as well as in the sphere of Chinese defence and its related strategic planning in his capacity as Minister of National Defence.

Minister of Defence and State Councillor, General Guanglie during exchange of views assured Sri Lanka and her Armed Forces of any assistance whatsoever in case of any emergency, catastrophe or otherwise. He also recalled historic ties that have been in existence between both nations and instances where China closely co-operated with the Sri Lankan leaders and vice versa.

General Guanglie, who is also a member of the powerful Central Military Commission (CMC) of the Communist Party of China (CPC) under which the PLA (Chinese Armed Forces) is formally operating, is one of the most respected legendary military leaders still serving in China.

The PLA attaches symbolic significance and exceptional prominence to Lieutenant General Jayasuriya’s six-day stay in the People’s Republic of China since the Sri Lankan Army Chief himself, was one among the best products the PRC’s premier seat of learning, the PLA’s National Defence University (NDU) has ever produced and this has led to the prevailing excellent military cooperation and best relations between both organizations.

At the PLA Headquarters on Thursday (7) morning, the Army Chief from Sri Lanka was accorded a colourful Guard of Honour on arrival and the parade commander in conformity with military traditions, invited Lieutenant General Jagath Jayasuriya to inspect his troops after the visiting dignitary received the salute from a special dais.

On Wednesday (6) afternoon, the visiting Sri Lankan Army Chief was warmly received by several senior PLA officers at the Beijing airport, together with the ambassador for Sri Lanka.

Cordial and inspiring discussions that ensued afterwards between the visiting Sri Lankan Army Chief and General Ma Xiaotian of the PLA, the world’s largest military force, as the first item in the day’s agenda lasted for more than an hour and centred largely on military matters of mutual and bilateral interest. The meeting also explored opportunities that could be made available to PLA trainees in Sri Lanka’s various post-war training exercises and modules. Similarly, possibilities for further expansion of other academic and professional programmes between both military organizations were also taken up for discussion during the meeting with the PLA General Xiaotian. In similar vein, General Xiaotian during exchange of views assured Sri Lanka of all the support by way of provision of military training to Sri Lankan Armed Forces.

Lieutenant General Jayasuriya, speaking high of the unfailing support and excellent understanding that prevails between both countries and respective military establishments recalled with gratitude the PLA’s timely contribution to Sri Lanka’s efforts in wiping out the menace of terrorism.

He also did not fail to lend his profuse thanks to the PLA for its uninterrupted accommodation of Sri Lankan officers for defence studies and training courses in China’s prestigious defence academies throughout the year.

Towards the end of the cordial meeting, General Ma Xiaotian presented a symbolic memento to the visiting Army Chief from Sri Lanka. The gesture of goodwill and memory was reciprocated at the same occasion.

General Ma Xiaotian, a General in the PLA Air Force assumed office in his current position as Deputy Head of the PLA General Staff Department in the year 2007. He was promoted to the full rank of General in 2009.

The PLA with its approximately 3 million members as the largest military force in the world has the world’s largest active standing Army and is comprised of five main service branches; PLA Ground Force, PLA Navy, PLA Air Force, Second Artillery Corps and the PLA Reserve Force.