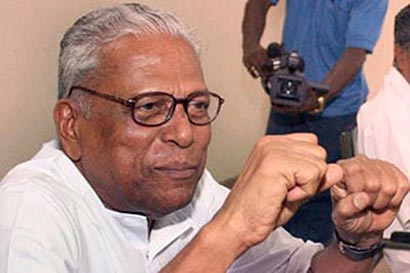 Leader of the Opposition V.S. Achuthanandan has alleged that India and the United States are making secret moves to conduct neutrino experiments deep inside the mountainous terrain of Idukki and Theni districts on the Kerala-Tamil Nadu border.

Mr. Achuthanandan told a news conference here on Monday that the experiment was sought to be conducted in an underground laboratory being set up in close proximity to the Mullaperiyar Dam in Idukki district without taking the consent of the local population or the State government.

The moves for setting up the lab deep in the ground with walls and roof of at least 1,000-metre thickness were a follow-up on the India-U.S. agreements signed by the first Manmohan Singh government. Although the Tamil Nadu government’s clearance had been sought for the project, no such effort had been made in Kerala’s case, he alleged.

Mr. Achuthanandan, who was accompanied by anti-nuclear activist V.T. Padmanabhan, said his information was that the construction of the tunnel would begin soon. He asked the Central government to clarify its stand on the neutrino experiment.