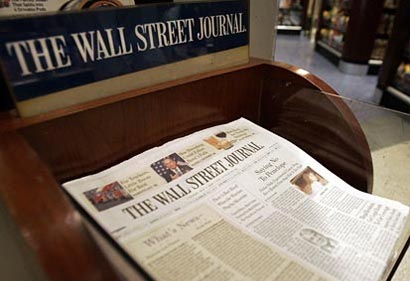 Commenting on the impeachment of Dr. Shirani Bandaranayaka, the Wall Street Journal warned that it gives the United Kingdom and other members of the Commonwealth a small quantity of leverage to require that the President of Sri Lanka uphold the rule of law if he wants to sit among polite company at its summit.

The editorial alleged Sri Lankans have a right to wonder a 26 year old war in the country will now be followed by another long nightmare of a strongman rule.

The editorial said, President Rajapaksa is keen to boost Sri Lanka’s image abroad, attract investment and undo the controversy surrounding alleged war crimes. Colombo is investing in preparations to host a Commonwealth summit later this year, and these circumstances should give small leverage for others to act.

Nullifying a government spokesman that the letter of the law was followed in the impeachment of the Chief Justice the editorial queried how then did it proceed when the Presidency decided to go ahead with a report of the parliamentary select committee against a verdict of the Supreme Court.

The editorial also pointed out the lack of due process, the inquiring committee’s refusal to give her enough time to respond and cross-examine witnesses.

The following is the full text of the editorial: “While Pakistan’s judges try to oust their elected leaders, elsewhere in South Asia an elected leader is busy ousting judges. We’re talking about Sri Lanka, where President Mahinda Rajapaksa sacked the country’s Chief Justice over the weekend.

This week, Mr. Rajapaksa installed one of his advisers in that post, and the fear is South Asia’s newest strongman is now unstoppable.

Chief Justice Shirani Bandaranayake’s main crime seems to have been to lock horns with the government. In October, the Supreme Court blocked legislation that would have awarded Basil Rajapaksa—the minister for economic development and the President’s brother—sweeping powers to control development funds, on the grounds that some of these powers belonged to the provinces. Though Sri Lanka’s parliament eventually passed an amended version of the bill, in November it also began impeachment proceedings against Mrs. Bandaranayake on 14 charges, mainly of financial misconduct. She says the charges are trumped up.

The impeachment proceedings also didn’t pass the smell test for due process. Parliament is dominated by the President’s party and Mrs. Bandaranayake’s defenders say the select committee appointed by the Speaker—another Rajapaksa brother—to investigate her neither gave her time to respond to charges nor the ability to cross-examine witnesses. The committee found her guilty on three charges in December.

A government spokesman tells us the letter of the law was followed, but an appeals court ruled against the parliamentary committee’s verdict, while the Supreme Court decided the committee had no authority to conduct the investigation. None of this stopped lawmakers, who trumpeted parliament’s supremacy and proceeded to expel Mrs. Bandaranayake.

The Chief Justice’s dismissal could well prove the decisive battle in the government’s long-running war against judicial independence. Last year, thugs assaulted an official in Colombo who spoke up about threats to the judiciary. Now that President Rajapaksa has shown he can remove the country’s top legal authority, chances are few judges will oppose his will.

The other checks and balances of a constitutional democracy are also under attack as Mr. Rajapaksa has sought to consolidate power since the country’s civil war with the Tamil Tigers ended in 2009. In 2010, he pushed through a constitutional amendment that did away with term limits on the presidency. Most of the press is state-controlled. Officials accuse civil society groups critical of the government of working for Western intelligence agencies. Sri Lankans are right to wonder if 26 years of war will now be followed by another long nightmare of strongman rule.

There’s still a possibility that outside pressure can rein in the Rajapaksa brothers. The President is keen to boost Sri Lanka’s image abroad, attract investment and undo the controversy surrounding alleged war crimes. Colombo is investing in preparations to host a Commonwealth summit later this year. This gives the U.K. and other members of the Commonwealth a modicum of leverage to require that Mr. Rajapaksa uphold the rule of law if he wants to sit among polite company.”