We are on the right track-Mahela 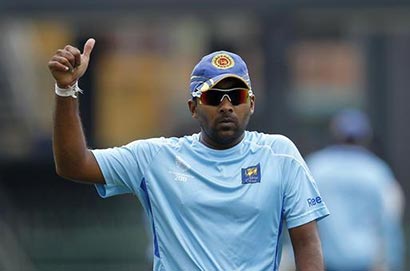 Sri Lankan skipper Mahela Jayawardene was staying cool after his side’s loss to Australia in the first final of the Commonwealth Bank Series, declaring they were on the right track and confident of firing in the second match.

After allowing Australia to 6-321 it took a heroic effort from the bottom order, led by Upul Tharanga and Nuwan Kulasekara, to scrape within 15 runs of victory at the Gabba on Sunday.

Jayawardene admitted it had been a poor performance for the majority, but said his side would draw strength from the character shown at the death and their good results through the group stage of the tournament.

“I’m quite happy with the effort from the boys. We showed a lot of character to get back into it. Obviously we didn’t play the perfect game today,” said Jayawardene.

“We lost wickets trying to catch up with the run-rate… but at the end some of the guys showed real character to keep fighting, which is something you want to cultivate in the team.”

“Unfortunately one-nil down in a three match tournament, we have to improve to beat them.”

“For us as a team, I think we’ve played some consistent cricket (and) as long as we’re in that mode and playing at that level, you know that we just have to fine-tune certain areas in a game and probably handle certain situations a bit better and you can win matches.”

Jayawardene was also happy to defend wayward paceman Lasith Malinga, who went for more than nine runs an over for the second time in three matches.

Despite leading all wicket-takers in the tournament with 15 in nine matches, Malinga has had an economy rate of 6.4 and even appeared to have been deserted by his highly-vaunted yorker in his abysmal showing against Australia.

Jayawardene blamed conditions and a continuing adjustment to the recently introduced second new ball in the 25th over, which eliminates one of Malinga’s best weapons in reverse swing, and said that he could tolerate a couple of bad games from his top quick after years of consistent service.

“Today it was tough with the ball getting wet. It was slippery so it was tough for him to get it right,” he said.

“I think in Hobart (when Malinga went for 96 off 7.4 overs) the accuracy probably wasn’t there. But when you have Lasith who’s done it for six years and you have two or three games off once in a while, I’m quite happy.”

“I think the Aussie bowlers also struggled to hit those full yorkers with the slippery ball. But it’s all about the challenge of improving.”

2 Responses to We are on the right track-Mahela

Home » We are on the right track-Mahela