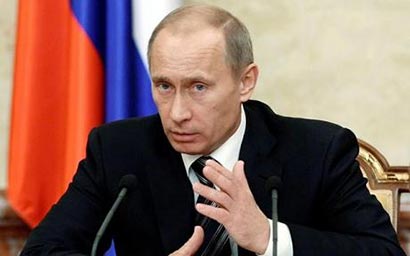 MOSCOW: Russian leader Vladimir Putin Sunday reclaimed the Kremlin in a crushing presidential election victory that he declared was honest but the opposition said was marred by serial violations.

Putin was on course for a first round election knockout with over 60 percent of the vote, initial results showed, with his main rival the Communist Party chief Gennady Zyuganov in a distant second.

In a late night appearance before over 100,000 supporters just outside the Kremlin, an apparently tearful Putin declared that he had won a clean fight and said Russian voters had sabotaged attempts to break up the country.

“We have won in an open and honest battle,” Putin said with tears welling in his eyes and his voice hoarse with emotion, standing on a stage alongside outgoing President Dmitry Medvedev on Manezh Square.

“I promised you we would win, we won. Glory to Russia!” Putin said, adding that voters had defeated provocations that aimed “to break up the Russian state and to usurp power.”

The supporters filled the square, spilling over into the streets, waving Russian flags and chanting “Putin, Putin!”. He later visited his election headquarters and shook hands with, hugged and even kissed supporters.

The Russian hardman denied that he had been crying during his speech, saying he had only shed “tears from the wind” on a bitterly cold and blustery night.

Putin still faces an emboldened protest movement against his rule which was not represented by any single candidate in the elections and had succeeded in holding three massive rallies over the last three months.

He will now in May formally reclaim the Kremlin post he occupied for two terms from 2000 to 2008 after his four-year stint as prime minister under the presidency of his protege Medvedev.

But under a change to the constitution, the next presidential mandate will last six years and analysts have warned that Putin risks facing serious unrest in that period if he does not respond to Russia’s changing society.

According to results based on more than half of polling stations reporting, Putin won 64.39 percent of the vote with Zyuganov trailing on 17.13 percent. The central election commission said turnout was around 64 percent.

An exit poll survey by the state-run VTsIOM polling institute projected that Putin would win with 58.3 percent of the vote, ahead of Zyuganov on 17.7 percent and Prokhorov third with 9.2 percent.

But opposition parties said there were clear signs of foul play in the election, including multiple voting, despite the installation on Putin’s orders of webcams to ensure transparency.

“These elections cannot be considered legitimate in any way,” Vladimir Ryzhkov, one of the leaders of the protest movement, told state television after the results were announced.

Zyuganov also blasted the elections as “crooked and absolutely unfair”, in comments on state television.

An AFP correspondent saw a fleet of 100 buses in the capital carrying workers from outlying regions to vote in Moscow, an action organised by the Nashi (Ours) pro-Kremlin youth group but which the opposition said was aimed at multiple voting.

In a tense contest of rival protests, the mass pro-Putin rally on Manezh Square will be followed on Monday night by an opposition demonstration of at least 30,000 on the central Pushkin Square for “Russia without Putin”.

That rally has been sanctioned by the authorities but police — who have brought in 6,300 extra officers from across Russia — have warned they will break up any unauthorised gatherings.

Three policemen were killed in an attack on a polling station in Russia’s troubled Caucasus region of Dagestan after the presidential polls, police said, underlining the continued challenge from unrest in the south of the country.