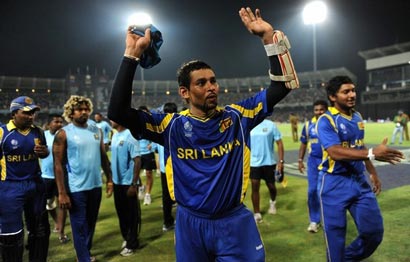 “We were thoroughly outplayed we can’t hide away from that, we go home with our tail between our legs,”said England captain Andrew Strauss after being defeated by the Sri Lankan team at R.Premadasa  stadium in Colombo.

By Derek Pringle, Colombo 7:15PM GMT 26 Mar 2011Derek’s Twitter “Setting the home side 230 in the last of the quarter-finals England broke their recent pattern of close finishes after being thrashed by ten wickets with 63 balls to spare.
“We were thoroughly outplayed we can’t hide away from that, we go home with our tail between our legs,” Andrew Strauss said afterwards.

“On a steamy, tropical night, England never had enough runs to defend without the squeeze of early wickets. Batting first is meant to confer a significant advantage at this venue and while England’s 229 was their highest score at the R Premadasa stadium against Sri Lanka, their bowlers never looked like defending the total.

“It was a good toss for us to win but we knew it was a flat pitch and that 260/70 was probably a par score. But we thought pressure is a big man and if we could get a few early wickets that might be enough to make that pressure count. Unfortunately, Tillakaratne Dilshan and Upul Tharanga played outstandingly well and we lost to a better side.”

“Tharanga, who reached his century shortly after Dilshan, struck the winning runs to secure Sri Lanka’s win and a semi-final tie here against New Zealand on Tuesday.”