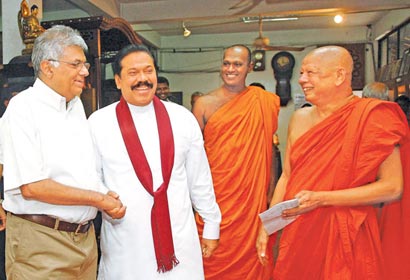 Gangaramaya Viharaya Chief Incumbent Ven Galaboda Gnanissara Thera yesterday called on Opposition Leader Ranil Wickremesinghe to support President Mahinda Rajapaksa’s efforts to rebuild and develop the country. The Thera said so during a ceremony attended by both the President and the Opposition Leader at the Temple premises yesterday morning.

On the occasion President Rajapaksa opened the newly constructed Buddhist Art Gallery at the Viharaya premises. The gallery displays a wide selection of Buddhist paintings, related to Sri Lankan temples, spanning from ancient times to the modern era.

President Rajapaksa after opening the gallery told the gathering that it consisted of a rare collection of Buddhist paintings. He said that the Government would lend all support to establish such facilities in other parts of the country as well.

The President also pointed out to the gathering that such facilities would help preserve literature and artefacts depicting Sri Lanka’s history and heritage for the benefit of the future generation.

The facility has been built in accordance with a concept by President Rajapaksa. President’s Advisor Daya Hewa Pathirana who was instrumental in establishing the facility also addressed the gathering.

Over 300 paintings displayed in the gallery depicts the evolution of Buddhist Art in Sri Lanka spanning over several eras. Secretary to the President Lalith Weeratunge also participated.