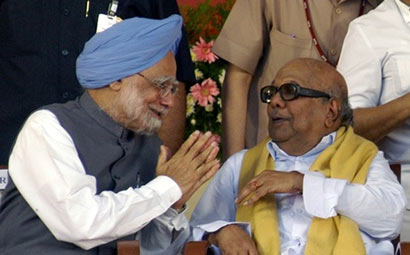 The present Government will go down in history as giving India the biggest stakes in Sri Lanka’s post-conflict despite being rewarded with consecutive humiliations by India. None of these humiliations have even remotely pushed Sri Lanka’s leaders to realize that India CANNOT be TRUSTED or made Sri Lanka’s leaders resolve to secure the country of Indian incursions. Its best response has been to give India backseat position at CHOGM. These childish antics will get the Government or the country nowhere. It has certainly been a testing process for Sri Lanka’s policy makers. But they have put the brakes every time calls are made by patriots of the country to secure Sri Lanka without exposing it to India knowing that with or without Eelam, India wishes to turn Sri Lanka into a satellite state and the buttons pressed for this ultimate goal are many and our leaders seem to be doing exactly what India wants them to do. Keeping traitors and giving them VIP positions has not helped the country or the leaders in the least – as proof is in the CHOGM pudding. We need to bring history into the scenario for during ancient times despite sporadic invasions from India’s South, Sri Lanka’s Kings had made necessary allegiances with either of the Pallava, Chola or Pandya kings who helped ward off the enemy from Sri Lanka. Have we not learnt lessons from history at least? Never was Sri Lanka ever under Indian rule what a shame if our leaders are allowing such to take place now.

Sri Lanka has suffered many a humiliation by India over the years. The list should now make Sri Lankans ask what the present leaders are going to do about new humiliations.

We can continue with the list but the gist is that the humiliations have not resulted in any reaction for the country appears to lack a policy on handling India and India’s immediate neighbors would all advise Sri Lanka that its better to draw up one before Sri Lanka ends up annexed to India.

If Sri Lanka is to protect itself from India yet continue its diplomatic relations which certainly can once the boundaries and no-go areas are properly drawn and conveyed clearly, Sri Lanka needs to

If India chose domestic politics, when we know how policy-less these celluloid politicians in Tamil Nadu are, it means India cares little for Sri Lanka or the Rajapakse Government. If this is the reality, why are we going behind India when it has shown that we are not even as important as the jokers in the southern state?

Sri Lanka now needs to start looking at drawing policies that serve the interests of Sri Lanka and its citizens who want to be Sri Lankan and not those with one foot here and another elsewhere. Sri Lanka must now either completely do away with the Indo-Lanka Accord or repeal the 13th amendment. It is now no time for half-hearted solutions or thinking luck will turn upon us.