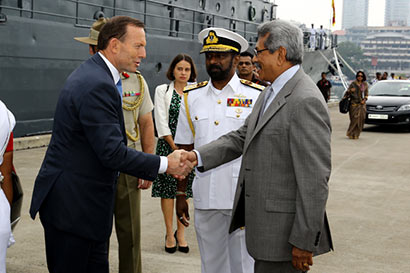 The Australian government yesterday declared that it would gift two large Bay Class patrol vessels to the Sri Lankan Navy early next year.

The announcement was made in Colombo on the sidelines of the Commonwealth Heads of Government Meeting (CHOGM).

Having gone aboard SLNS Sayura at the Colombo Port Australian Premier Tony Abbott told local and Australian press that the delivery of patrol vessels was in accordance with the ongoing partnership with Sri Lanka to curb illegal migration.

SLNS Sayura, a Sukanya-class vessel served the Indian navy before Sri Lanka bought it in 2000. The vessel was part of the task force responsible for hunting down eight floating arsenals belonging to the LTTE on the high seas during 2007-2008.

While emphasising that those arriving in Australia illegally wouldn’t be accepted, the tough talking Abbott said: “Illegal migration is a curse and an illegal trade. This is why the promises that the people smugglers offer are promises of death, not life. What we want to do is enhance the capacity of the Sri Lankan navy to preserve life at sea and to close down this evil trade.”

Premier Abbott said that as the two vessels had been in service with the Australian Customs for about 10 years, they would be brought back to full operational capability at a cost of $2 million.

Responding to queries by the Australian media, Abbott stressed that he was confident of Sri Lanka’s commitment to combat people smuggling.

Abbott declined to comment on British Conservative Premier David Cameron’s vow in Colombo that he would push for an international war crimes investigation in case President Mahinda Rajapaksa failed to address accountability issues in time for the next sessions of the United Nations Human Rights Commission (UNHRC) in Geneva.

Abbott said that since the conclusion of the conflict there had been much progress in Sri Lanka. “I welcome the opportunity that Sri Lanka has had to showcase itself to the world.”

“As I said, at the opening of the conference a couple of days ago, Sri Lanka has come through many troubles, but today there is more freedom and more prosperity.

“Obviously there is more to be done, but much progress has been made, and the fact that Sri Lanka is prepared to showcase itself in this way to the wider Commonwealth shows the goodwill and the good intentions of the Sri Lankan government.”

Abbott talked highly of a meeting he had had with President Mahinda Rajapaksa.

At the onset of the briefing, PM Abbot, standing on the deck of the warship, declared that it was terrific to be in Colombo.

Abbott blamed the previous government for wrong polices that led to over 4,000 illegal immigrants reaching Australia within a short period.

When pressed by the Australia media as regards the terms and conditions of delivering the vessels, Abbott said that he presumed they were provided through the foreign aid budget.

Australian High Commissioner in Colombo Robyn Mudie declined to comment on the transfer of vessels.

The Australian media raised the unexpected Australian move with British Prime Minister David Cameron on Saturday at the media briefing. Cameron declined to comment on Abbott’s intention, while asserting that one couldn’t glide over human rights issues.

4 Responses to CHOGM: Australia breaks ranks with UK over Lanka