We too want to be economically strong – President tells China 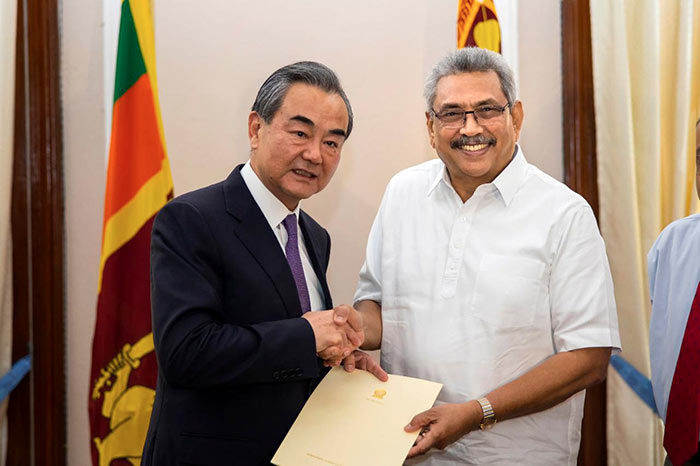 “Sri Lanka is a small country. Fortunately or not, it is geographically placed in a most strategic location. As a result, the country has to face many political challenges. The only way to overcome them is to be economically strong. The economic independence will ensure political independence”, President Gotabaya Rajapaksa told the visiting Foreign Minister of the Peoples’ Republic of China Wang Yi who called on him at the Presidential Secretariat yesterday morning (14).

Minister Yi in his response said that China, as did in the past, would be Sri Lanka’s longtime partner in prosperity and growth. He noted that China’s policy towards Sri Lanka had always been consistent and China would continue to be Sri Lanka’s reliable friend.

The Foreign Minister of China commenced the cordial conversation with the President conveying the warmest greetings from the President of China Xi Jing Ping. He congratulated “China’s old friend” President Rajapaksa for getting elected to office. Minister Yi said that after the in-depth discussion he had with President Rajapaksa he was confident that already existing strong bilateral relations could be further strengthened.

President Rajapaksa warmly reciprocated the visiting Minister’s goodwill and warm wishes. The President revealed that he was an admirer of President Xi Jing Ping and that he had followed his speeches and statements closely. He also stated that some of President’s Xi’s policies especially on poverty alleviation were incorporated into his own mandate. He also thanked Minister Yi for the invitation to visit China.

Recalling his many visits to China, President Rajapaksa said “China is not a stranger to me”.

“As Sri Lanka’s strategic partner China will continue to standby Sri Lanka’s interests. China stands for the country’s sovereignty, territorial integrity and independence. We will not allow any outside influences to interfere with matters that are essentially internal concerns of Sri Lanka”, Minister Yi pledged.

Referring to President Rajapaksa’s commitment to make Sri Lanka economically independent, the Chinese Foreign Minister said that during the President’s visit next month all arrangements would be made to meet with necessary parties that can help Sri Lanka in the areas of technology, tourism, infrastructure and other related fields. The visit, he promised will be most productive.

“Sri Lanka may have less landmass, but will soon be strong economically. China will be with Sri Lanka in its striving to reach this goal”, Minister Yi assured.

Home » We too want to be economically strong – President tells China