Weliweriya incident: ‘IT WAS A POLITICAL PLOY USING RESIDENTS’ 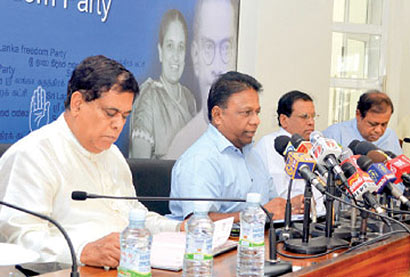 While castigating those responsible for the unfortunate incident which took place on Thursday in Weliweriya, leading to the loss of a life, top government Ministers yesterday said a certain group seeking political mileage triggered the tensed situation.

The minister expressed the Government’s and President’s condolences over Thursday’s unfortunate incident resulting in the death of a person.

The minister explaining the background to the incident pointed out, the government had already taken measures to provide pipe – borne water for residents at the time this incident took place. “President Mahinda Rajapaksa at the progress review meeting of the Water Supply and Drainage Ministry held last Tuesday, referring to the complaints of the residents as appeared in newspaper reports, ordered that pipe borne water be provided immediately to this village.

Accordingly, the laying of pipes from Kadawatha was in progress even by yesterday,” the minister observed. He further revealed that the management of the factory in question had sacked over 100 workers associated with the JVP Trade Union 7-8 months ago for arousing tensions within the factory for political gains. He stated the background behind these events should be further studied.

He said the President and Economic Development Minister Basil Rajapaksa personally talked over the phone to the Buddhist monk who had begun a hunger strike and later, the monk decided to end it.

“Defence Secretary Gotabhaya Rajapaksa ordered to temporarily close down the factory until the report on the test samples of water were received. The security officers brought this message to the protesters and a group with vested political motives attacked them even using petrol bombs.

“About 5-6 Army personnel were injured and one among them sustained severe injuries. Therefore, we state with responsibility that this entire episode was a result of a few who took the water issue into their hands seeking political mileage” he said.

Responding to a question by a journalist, the minister also explained that the Army was deployed to control the situation, only when the Police alone could not handle it. The minister observed the road was blocked for long hours inconveniencing the people and resulting in a heavy traffic congestion.

Army Board of Inquiry appointed

New Army Commander Lt. Gen. Daya Ratnayake yesterday appointed a Board of Inquiry headed by Ajudant-General Major General Jagath Dias to probe the Weliveriya incident. According to Army Spokesman Brigadier Ruwan Wanigasuriya, this Board of Inquiry consists of senior officers of the Sri Lanka Army.

This board will lay speical emphasis on the conduct of Army personnel during the incident.

He said that several parties have made allegations over the conduct of the Army during the incident and the committee will seriously look into these allegations.

One person was killed and 36 persons were injured when the Army attempted to disperse a group of villagers protesting over the pollution of water in the area.

6 Responses to Weliweriya incident: ‘IT WAS A POLITICAL PLOY USING RESIDENTS’

Home » Weliweriya incident: ‘IT WAS A POLITICAL PLOY USING RESIDENTS’