Weliweriya water issue: Factory to be relocated to a BOI zone 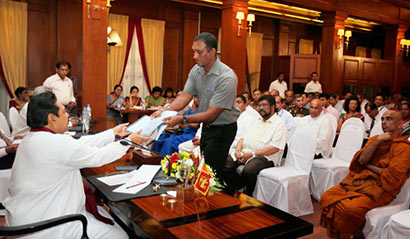 President Mahinda Rajapaksa today ordered the relocation of the Dipped Products Glove factory which had been at the centre of the controversy in Weliweriya, leading to protests and clashes between residents and security forces personnel.

Resident of Rathupaswala had engaged in a protest on August 01 claiming that the effluents released by the factory is causing environmental and water pollution and demanded that it be shut down.

The company, Dipped Products PLC, part of the Hayleys Group, however has rejected the accusations saying the factory’s effluent water quality is regularly tested by the National Building and Research Organization and that the facility operates with valid Environmental Protection Licence.

President Rajapaksa held discussions with Rathupaswala area residents and relevant officials on the Weliweirya water issue this afternoon at the Presidential Secretariat.

After listening to detailed accounts from residents, factory representatives and other officials, the President offered the following solutions to help resolve the situation:

The main priority of the authorities in this region will be to ensure that the people receive safe water while the Government Analyst’s Department will carry out testing of the water and issue a report.

In addition to these specific aspects, President Rajapaksa also stated that any new factory that will be located in Sri Lanka must be constructed within a BOI zone to prevent these types of problems in the future.

The resident expressed satisfaction at the agreements reached and agreed to work with officials to help resolve the problem, the President’s Media Unit said.

President Rajapaksa urged the citizens to refrain from taking the law into their own hands if a problem arises in the future and requested all parties to try their utmost to resolve crises through discussion.

Violence had erupted during the protest by residents of Rathupaswala on August 01 as security forces personnel and protesters clashed in Weliweriya, resulting in the deaths of three persons and leaving over 30 injured.

Opposition parties and rights groups have condemned the crackdown against the protest by villagers who were demanding clean drinking water for thousands of residents of Weliweriya and have criticized the manner in which authorities had handled the situation.

The military said it had named a five-member board of inquiry to probe the allegations against the troops.

Home » Weliweriya water issue: Factory to be relocated to a BOI zone