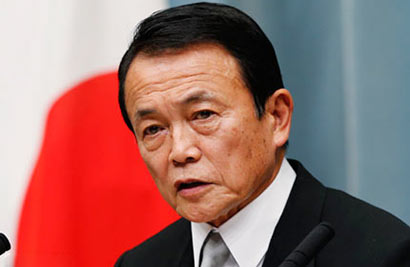 Western nations are underestimating the development in Sri Lanka since the end of the conflict, Japanese Deputy Prime Minister Taro Aso, said when he met with President Mahinda Rajapaksa for discussions yesterday. President Rajapaksa is currently on a four day official visit to Japan which began Monday.

Aso who was a former Prime Minister of Japan is currently holding the position of the Finance Minister as well.

He said, “Sri Lanka’s security situation is getting better. The economy is on the right track. Investors and tourists are coming to the country”.

President Rajapaksa while thanking Japan for its assistance to Sri Lanka’s development remarked that leaders and people of the world should visit Sri Lanka to see for themselves the progress the country had achieved in all aspects in recent times.

During the discussion he recalled that he served as a JICA volunteer in Sri Lanka some years before. “Now the conflict is over. Sri Lanka had made great strides under President Rajapaksa’s able leadership,” he noted.

Ambassador Yasushi Akashi also met with the President at a private lunch. During the visit President Rajapaksa is expected to hold discussions with Japanese Prime Minister Shinzo Abe and have an audience with the Japanese Emperor and Empress who will also be hosting a lunch for the President and the First Lady at the Imperial palace.

President Rajapaksa is scheduled to host a breakfast meeting for leaders of Japan’s corporate and industry sectors as well as attend the inaugural ceremony of the Sri Lanka Business Forum. In addition to several bilateral meetings with Japanese ministers and government officials the President is also scheduled to attend a meeting of the Japan Sri Lanka Parliamentary League.