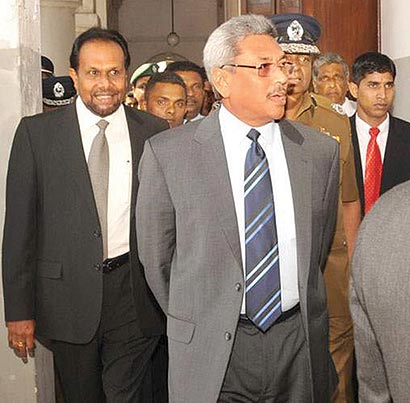 Defence Secretary Gotabhaya Rajapaksa testifying before the Trial- at-Bar hearing Sarath Fonseka’s white flag issue yesterday said that the Sunday Leader lead story on December 13, 2009 that he gave orders to eliminate LTTE members who came with white flags to surrender at the last stage of the war is totally false and a deliberate lie.

“There was absolutely no truth in that story”, the Defence Secretary asserted.

Examined by Deputy Solicitor General Buvanika Aluvihare the Defence Secretary said that he had served the Army for about 20 years and assumed duties as the Defence Secretary in 2005. The LTTE attempted to give the impression to the world that they were the only organisation who always looked after the interests of the Tamil speaking people.

“The Sri Lankan Army had always treated the LTTE cadres humanely. Out of 11,968 LTTE cadres who surrendered to the Army 5,000 had been rehabilitated including several women LTTEers and five LTTE doctors. Some of the LTTE suspects had been prosecuted in several Courts,” the Defence Secretary said.

He emphasised that after 30 long years of battle with the LTTE, it was due to President Mahinda Rajapaksa’s far-sighted advise and counsel that the Forces were able to liberate the country from terrorism on May 18, 2009. The credit should go not only to the Army but also the Navy, Air Force and the Police.

Not a single person attempted to contact him in order to clarify about the white flag issue which appeared in the Sunday Leader. He never gave any instructions to Brig. Shavindra de Silva.

Questioned at length about the Sunday Leader story the Defence Secretary said that the story led to several misunderstandings by foreign countries. Tamil people living abroad had different views. The Government had to face several problems internationally due to that article in the Sunday Leader.

Cross examined by Senior Defence Counsel Nalin Ladduwahetty, the Defence Secretary said that when all Army Commanders assumed duties, their prime responsibility was to take all steps to eradicate terrorism. Sarath Fonseka was appointed as the Chief of the Army by President Mahinda Rajapaksa.

Questioned about an article that appeared in the June 2009 issue of the “Business Today” the Defence Secretary denied that he gave an interview to that magazine.

Re-examined by Deputy Solicitor General Buvaneka Aluvihare the Defence Secretary said that KP was arrested by the intelligence division and brought to Sri Lanka and investigations against him are pending.

Sarath Fonseka earlier pleaded not guilty to the three charges preferred against him of making a false statement to The Sunday Leader Senior Journalist Frederica Jansz that Defence Secretary Gotabhaya Rajapaksa had told Brig. Shavindra de Silva to eliminate the LTTE cadres who come with a white flag to surrender during the war.

Sarath Fonseka is charged on three counts under the Criminal Procedure Code and under the Emergency Regulations Sections 28 and 29.