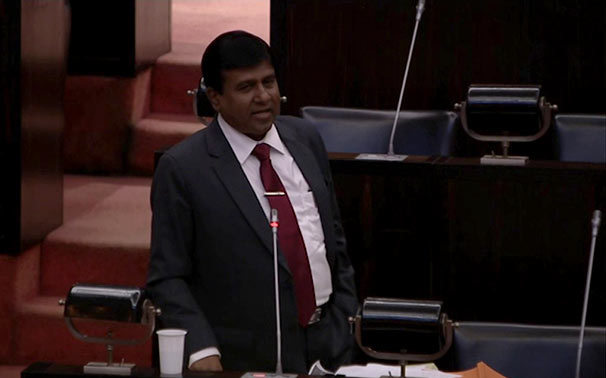 Delivering a special statement in Parliament, Minister Wijeyadasa Rajapakshe today requested the Speaker to resolve the prevailing political crisis in the country through discussions with the President.

He urged the Speaker discuss the issue with the President and to restore normalcy by establishing a government which has a majority in parliament.

The Minister of Education and Higher Education attended today’s session and addressed the House today, despite the decision taken by MPs representing the government to boycott parliament proceedings for the third day today (29).

Rajapakshe requested the Speaker to allow any group which is able show a majority in Parliament in a democratic manner to form a government and move forward.

The minister said that as a Member of Parliament he is prepared to make any sacrifices to achieve this purpose.

He also said that there is no leader who will emerge victorious within this political instability.

Rajapakshe added that the basic responsibility to control this situation rests with the Speaker and said that he decided to address the House today in order to emphasize his point.

He reiterated that this problem should be resolved by giving power to whichever party that has a majority of support in the Parliament.

The minister said that presently the legislative has practically broken down and due to this the people have lost faith in it.

He said that if parliamentarians just continue to hurl insults against one another the future of the country will look bleak.