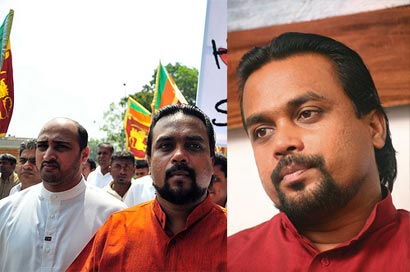 Government Minister Wimal Weerawansa says he stands by the comment he made last week regarding the United Nation’s office in Colombo saying he made the comment as the National Freedom Front (NFF) leader and not in his capacity as a Government member and reiterated his call for the public to surround the building and protest against the UN panel.

When asked by Daily Mirror online if he was under any pressure regarding his comment after it had created a lot of controversy, Weerawansa said there was no such pressure as the position was that of his party.

“We should surround the UN office in Colombo and put pressure on UN Secretary General Ban ki-moon to reverse his decision to appoint a panel on Sri Lanka. I am saying this as the leader of the NFF and not as a member of the government,” Minister Weerawansa said.

He also said there is no need for anyone to apologize to the UN over the comments he made to the media last week and instead it is the UN Secretary General who should apologize for attempting to tarnish the image of Sri Lanka and its troops.

Weerawansa had last week urged the public to surround the UN office in Sri Lanka and trap the staff inside until a decision was taken by the UN Secretary General to dissolve the panel he appointed on Sri Lanka.

Weerawansa also said that the appointment of the three-member advisory panel by UN General Secretary Ban Ki Moon is the primary step that would prompt the Sri Lankan leaders to be produced to the International Court of Justice (ICJ).

He also said there was an indication the government may apologise to the comments made by Minister Weerawansa.