Wimal threatens to break from Government 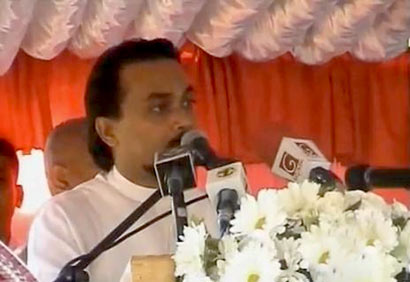 Leader of the National Freedom Front (NFF) and Minister of Construction, Engineering Services and Housing and Common Amenities, Wimal Weerawansa, yesterday urged President Mahinda Rajapaksa to amend the Constitution, to remove land and police powers from the Provincial Councils (PCs).

Addressing the May Day rally of the NFF held at the P.D. Sirisena Stadium in Maligawatte, he vowed to break away from the government, if the Northern Provincial Council (NPC) election held in September 2013, without removing police and land powers from the PCs.

Weerawansa said, the present government can easily pass an amendment to remove land and police powers from the PCs as it already has the required two-thirds majority of Parliament.

He stressed, if the NPC election is held without removing land and police powers from the PCs, it will satisfy the needs of the Tamil separatists and the value of the victory over terrorism will be lessened.

“Although we defeated the Tamil separatists military, they still act strongly in other ways. If Tamil separatists gain the power of the NPC, they will remove all the Army camps from the Northern Province. There will be a provincial police and it will act under the Chief Minister of the Province,” Weerawansa said.

According to Weerawansa, holding elections in the North would set up the stage for India and the Western countries, to rule the Northern and Eastern Provinces as one of their colonies. He went on to say after Tamil separatists gain the power of the NPC, they will combine it with the Eastern Provincial Council (EPC).

“The background to combining two Provincial Councils has already been set up by the Western world. They have given funds to some organizations to create a Sinhala-Muslim conflict in the country. By highlighting such conflicts, the Sri Lanka Muslim Congress (SLMC) will forge an alliance with the Tamil National Alliance (TNA) at the EPC. Then the separatists will combine the NPC and the EPC,” he warned.

Weerawansa said such a combined PC will request the United Nations to take over its administration and act according to the agendas of the Western forces.

He also alleged that Tamil separatists want only Tamils to live in the North, but not Sinhalese and Muslims and that claim will be given legitimacy if an election in the North, is held without removing land and police powers from the PCs. (Ceylon Today)

7 Responses to Wimal threatens to break from Government